Buried under the Covid-19 headlines, a recent Public Health England report reiterates the value of vaping for smoking cessation.
By George Gay

Amid the unfolding tragedy and chaos on March 11, when the World Health Organization (WHO) declared that the spread of Covid-19, the disease caused by the SARS-CoV-2 coronavirus, had reached pandemic proportions, it was easy to lose sight of the fact that the world was in the grip of a number of pandemics, one of which, according to the WHO, is the “smoking [tobacco] pandemic.”

I have never understood how smoking can sensibly fit into the definition of a pandemic, but then it seemed to me that Covid-19 had been of pandemic proportions for a while before it was declared to be so. What do I know? I’m just some mug in lockdown whose rights have been taken away by the people who should have avoided the necessity to do this by having been part of a global initiative to prevent the emergence of such viruses or at least to deal with their effects far more efficiently than has been the case. Still, you know me—I don’t like to complain.

Is there some reason why I have drawn attention to the existence of the two pandemics, I sense you asking? Well, since you raise the issue, the two are loosely connected, at least in England. About a week before the WHO bestowed pandemic status on Covid-19, Public Health England (PHE) had issued its latest vaping report in March (“Vaping in England: An Evidence Update Including Mental Health and Pregnancy”), and vaping, as I think any fair-minded person would admit, has the power, in the parlance of our times, to help flatten the curve of smoking and no doubt, along with other initiatives, to eventually eliminate this pandemic.

PHE, which is an executive agency sponsored by the Department of Health and Social Care, has long said that vaping regulated nicotine products poses a small fraction of the risks of smoking and that vaping such products, in conjunction with other interventions, will greatly increase the chances of tobacco smokers stopping smoking. And these comments were confirmed in its latest report.

So everything is hunky-dory? Smokers can gradually move to vaping and other activities associated with next-generation nicotine products once those products meet their expectations, and at least one pandemic will have been dealt with? Of course, as anybody reading this magazine will be aware, things are not that simple. Ever since vaping came onto the scene, there have been no end of people willing to condemn it as smoking by another name, and their voices have been amplified in much of the media, which has reveled in running questionable headings to scare the pants off smokers and would-be vapers without the necessity of producing any evidence as to why they should be scared of vaping. “Is vaping riskier than smoking?” is the type of heading often used. Of course, the short answer to the question is “no,” but if you’re paid by the word …

Given these circumstances, the sane voice of organizations such as PHE are vital, and it is a pity that its latest report probably received much less coverage than it might have done if the media had not been preoccupied with the Covid-19 pandemic rather than, as usual, the smoking pandemic. After all, from what we are told, the former is not going to cause anything approaching the death toll attributed to the latter.

Certainly, British American Tobacco (BAT) welcomed the report. David O’Reilly, the company’s director of scientific research, was quoted on its website as saying, in part, that it was encouraging to see PHE continuing to highlight that “regulated vapor products are much less harmful than cigarettes and that vaping continues to help those U.K. smokers seeking an alternative to make the switch.”

So let’s try to give a little airing to the PHE’s March 4 report, the summary of which, to my mind, is admirable for combining science with common sense in a clearly written document that is easily digestible by ordinary smokers and vapers and by people, such as me, who are not scientists. The document confirms in part that the conclusions of PHE’s previous reports are still “important messages for preventing harm” and that these conclusions, broadly summarized, are as follows:

To my mind, it is one of the smallest figures within the PHE report that needs to be given the most airing—that needs to be used as a strap line on every vaping story. “Vaping remains most common among smokers and former smokers, with less than 1 percent of people who have never smoked currently vaping,” the report says. Less than 1 percent. That figure completely undermines a common claim made by those implacably opposed to vaping: that vaping will draw a wave of nonsmokers to nicotine addiction. In fact, taken together with other figures in the report, it demonstrates that vaping is a means to improving the health outcomes of individuals and the population at large. As PHE says, most adults use vapor products to help them quit smoking. 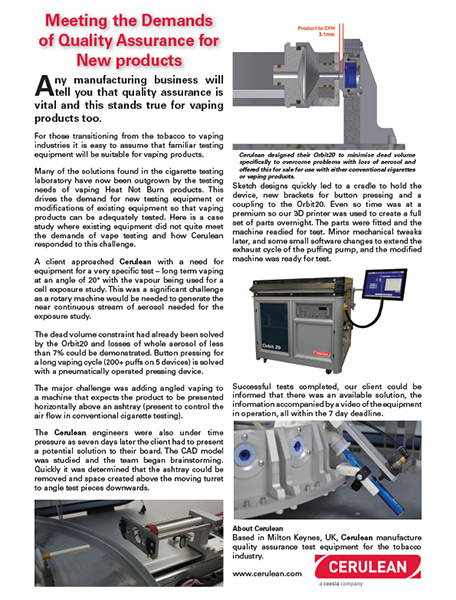 It has to be of concern, therefore, that those opposed to vaping have been successful in getting their messages across. “Perceptions of harm from vaping among smokers are increasingly [my emphasis] out of line with the evidence,” PHE reports. “The proportion who thought vaping was less harmful than [smoking] cigarettes declined from 45 percent in 2014 to 34 percent in 2019. These misperceptions are particularly common among smokers who do not vape.”

O’Reilly was quoted on the BAT website as saying that the growing misperceptions regarding the relative risks of vaping and smoking were deeply concerning and likely to be contributing to a huge missed opportunity from a public health point of view. “It’s key that smokers have access to accurate facts regarding these important products in order to make an informed choice,” he said. “As one of the world’s largest vaping companies, which puts science, product safety and testing at the heart of everything we do, we are committed to working with public health bodies, harnessing our global resources and expertise, to help educate smokers regarding the potential benefits of vaping.”

Such misperceptions, which are not the results of accidents, have their consequences because “stop smoking services in England suggest that when a vaping product is used in a quit attempt, either alone or with licensed medication, success rates are comparable to, if not higher than, licensed medication alone,” according to PHE.

Meanwhile, the proportion of current smokers who have not even tried vapor products apparently remained at 37 percent between 2018 and 2019, suggesting that those “Is vaping riskier than smoking?” headings have been doing their job in creating an atmosphere of unfounded fear around vapor products.

Some of the most surprising aspects of the report have to do with vaping among young people, which seems to be at a low level, contrasting starkly with what we are often led to believe in England and what we are told is an “epidemic” of vaping among young people in the U.S. It is worth noting here that PHE points out in its report summary that comparisons across countries are hampered by inconsistent questions and survey methods, though it also says that “[o]ne survey that compared vaping among 16-[year-olds] to 19-year-olds from 2017 to 2018 using consistent methods found lower levels of vaping in England compared to [those in] Canada and the U.S.”

Again, as you could expect, current vaping is mainly concentrated in young people who have experience smoking. In fact, less than 1 percent of young people who have never smoked are current vapers, and PHE noted that current smoking prevalence (weekly or less than weekly) among 11-year-olds to 15-year-olds halved between 2009 (11 percent) and 2018 (5 percent), though it had remained relatively steady since 2014.

PHE reported that young people’s perceptions of the relative harms of vaping compared with smoking are increasingly out of line with the evidence, reflecting, but not as starkly, the situation among adults. The proportion of 11-year-olds to 18-year-olds who thought that vaping was less harmful than smoking declined from 68 percent in 2014 to 52 percent in 2019. Just over a third of 11-year-olds to 15-year-olds thought it was OK to try vaping, and just under a quarter thought it was OK to vape once a week. Most young people who have tried vaping did so out of curiosity.

Almost 60 percent of 11-year-olds to 15-year-olds who vaped regularly (more than once a week) reported being given vapor products, mostly by friends. But many also reported buying vapor products from other people, shops and the internet, and PHE believes that “enforcement of age of sale regulations needs to be improved.” Tank models remain the most popular type of vapor device used by young people in England.

The March-issued report, which presents updates on the prevalence of vaping among young people and adults and reviews literature on vaping among people with mental health conditions and pregnant women, is the sixth in a series of independent reports commissioned by PHE to summarize evidence on e-cigarettes to inform policies and regulations. PHE says that a “comprehensive e-cigarette safety review will be the focus of a future report.” 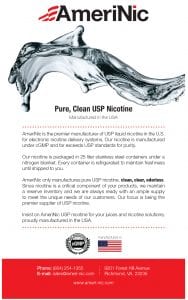 In setting out the aims of the report, PHE said that despite reductions in smoking prevalence, smoking remained the biggest single cause of preventable death and disease and a leading cause of health inequalities. “So, alternative nicotine-delivery devices that are less harmful could play a crucial role in reducing this health burden,” it said.