The Suorin Shine pod system works well, is easy to use and doesn’t break the bank.

Suorin’s Shine feels remarkably familiar for anyone who has used a pod system in recent years. It’s extremely easy to use, with the pod simply sliding into the top and holding in place securely with magnets. Being refillable, each pod has a small silicone plug on the side and each pod can hold two milliliters of e-liquid. The battery is a moderate size but can still be held and used similarly to a traditional cigarette—an important feature for those who have recently switched over from smoking.

A single button lies on the face of the battery, which can be used to power the Shine on or off but can also be used as a manual fire button. The battery capacity is impressive, particularly for a pod system. 700 mAh lasts a good while, especially combined with the optimally efficient one-ohm resistance pods. Lastly, the overall design is unassuming, simple and sleek with a single LED on the tip to indicate that the device is firing and to display approximate remaining battery life.

The size of the Shine is well deserved. It’s larger than something like the Juul by a good margin, but it’s nowhere near being bulky or inconvenient. With that extra size comes a larger juice capacity and a substantial battery capacity increase. Additionally, weight is kept to an absolute minimum with a construction that relies on aluminum and plastic. While too much plastic can conjure images of poor quality, the Shine makes use of it brilliantly.

A dark, translucent plastic runs all around the outer rim of the device, with aluminum plates on each face. Again, simplicity lends itself extremely well to the overall design of the Shine. It looks great, and it allows the Shine to have all the benefits of a medium-sized pod system without the weight.

In terms of performance, the Shine is no slouch. While the draw leans toward the airier side, the flavor does not suffer whatsoever. Vapor production is top-notch and can compete with the best mouth-to-lung vapes on the market. The vapor comes easily, and it never feels anemic or unsatisfying. The Shine outputs a constant 13 watts of power when utilizing the automatic switch, but when using the manual fire button, the Shine boosts to the full 15-watt output.

It’s not a huge difference, but that extra power can come in handy in certain situations, such as when a pod is on its way out. In this case, flavor and vapor production can be diminished, and rather than wasting whatever juice is left in the pod, the manual button can be used to get the last little bit of performance out of a dying coil.

Alternatively, many vapers prefer the manual button, and there’s nothing wrong with using it all the time. In fact, the Shine caters to two completely different vape styles. It can be used between the fingers with an automatic draw or held with one’s thumb on the button, more like a mod. It also has enough airflow, power and battery life to support restricted lung hits, and being refillable, lower nicotine strengths can be used for this purpose. On the other hand, mouth-to-lung vaping with higher nicotine e-liquids is also perfectly viable, and neither style suffers as a result of the other. 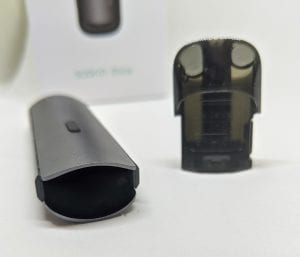 It should also be noted that the Shine doesn’t tend to leak or cause spitback. As pod systems evolve, these problems occur less and less, but given that these issues are a major turnoff for new vapers, rest assured that with the Shine, the only problem new vapers will need to contend with is which flavor to use. With the recent banning of flavored closed-system pods, one of the major advantages of the Shine is that it’s refillable. In addition to saving money due to getting more than one fill out of a pod, vapers now get to select from the entire wide range of flavors available from countless e-liquid manufacturers rather than having to rely on the select few generally available in closed systems. Flavor plays a major part in the success of vaping, and as such, this advantage cannot be overstated.

Although the Shine utilizes a micro-USB charging port in lieu of the newer USB-C, it still charges from empty to full capacity in just under one hour. Considering the battery capacity, only one charge per day should be necessary. However, when that charge needs to occur, the inconvenience is minimal, and the Shine can still be used while it’s being charged. The LED indicator lights up when the fire button is pressed, or when a drag is taken. The LED will display green when the battery is above 70 percent capacity, red when it’s below 30 percent capacity, and blue anywhere in between. Like everything about the Shine, it’s simple and it works.

The 1 ohm coils used in each pod maximize both power and battery life. As coil resistance increases, the voltage required to power that coil increases, which causes the battery to drain faster with each drag. Conversely, as the resistance of the coil falls below 1 ohm, the amperage draw required from the battery increases exponentially.

One ohm is the most efficient resistance possible as it maximizes power output while balancing voltage output and amperage draw perfectly. It’s a smart decision, and given the nature of pod systems, it’s curious that other manufacturers would use anything other than 1 ohm coils in their pods.

When it comes to the price, the Suorin Shine is highly competitive, running about $20 to $25 at retail. This includes the battery, the charging cable and two empty pods. Replacement pods are available in packs of three and cost about $10. Given that Suorin recommends changing out the pod after five refills, each pod can average about one week of use.

E-liquid prices vary, but in general, salt-based e-liquid costs between $12 and $20 for a 30 mL bottle. Do the math, and that means about $50 as an initial investment and $50 to $100 per month as upkeep. That’s noticeably less than using a closed system and vastly less expensive than smoking. For a product as good as the Suorin Shine, that’s a steal for the end user. 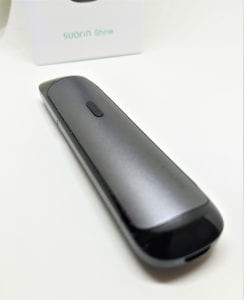 The Suorin Shine is perfect in almost every way. If there is one small gripe to be had, it’s that the silicone plug for the fill port can be difficult to remove for filling. Given the alternative, a finicky port plug is better than leaking, but something a little more tangible to grab onto would have been nice. However, nothing is perfect, and given all the other features that make the Shine a great choice, the silicone plug is an afterthought.

The Suorin Shine is exactly the type of pod system that vapers need right now. It’s refillable in order to get around those pesky flavor bans for closed systems. It can be used like a traditional cigarette or more like a mod, favoring smokers, new vapers and veterans alike. It opens options by allowing the use of any e-liquid instead of only a select few.

The design is simple but still looks great and functions exactly as intended. The vape quality is top-notch in terms of both flavor and vapor production. It’s large enough for a day’s worth of battery life and e-liquid but remains light enough to be carried around in a pocket with no added bulk. Finally, the price is more than reasonable considering the performance and what is included in the kit.

Most new vapers would say that, as customers, they are looking for something that works well, is easy to use and is inexpensive. The Suorin Shine checks all those boxes. It has the potential to appeal to a wide market with multiple vape styles and a variety of needs without breaking the bank. Plus, with so many people losing access to the flavors that kept them from smoking, the Suorin Shine is positioned to fill that need perfectly.

In all areas, this is an improvement over most closed-system pods yet it remains simple enough for new vapers with minimal learning curve. Suorin really did a great job taking what people expect out of a pod system and elevating it to the next level. Fancy features won’t do a lot of good if they alienate the target market, and the Shine simply improves upon existing technology, making it accessible while still offering a truly next-gen vapor product.