Encourage smokers to switch to vapor products by taxing them lower than traditional cigarettes.

Recently, I was intrigued by the following heading that appeared above the abstract of a scientific paper: “Flavors enhance nicotine vapor self-administration in male mice.” I guess that, as a nonscientist used to reading general stories, I was drawn to the fact that there seems to be no human agency in the activities described. The flavors seem to operate of their own accord and the male mice “self-administer” those flavors.

Notice, too, how the flavors not only increase the uptake of nicotine vapor in male mice, they also “enhance” that uptake, presumably introducing some sort of measurable qualitative increase to the process. And what about this self-administering business? It seems to suggest that the male mice in question have personalities or egos, which I would be happy to accept but which raises the question of whether it was morally acceptable that these mice should have been used as a means to an end. I would say no.

Of course, if the mice did display signs of selfhood, I hope the researchers took care in interpreting their reactions. There is a danger of significant error in drawing human-centric conclusions about the behaviors of nonhuman animals being made to take part in human-designed experiments since those behaviors might be driven by the ways in which nonhuman animals uniquely experience their lives and that we do not understand.

Such experiments on nonhuman animals seem to me to be simply preposterous. Professor Sir George Pickering was apparently once quoted in the British Medical Journal as saying, “The idea, as I understand it, is that fundamental truths are revealed in laboratory experiments on lower animals and are then applied to the problem of a sick patient … It is plain nonsense.”

In the abstract, the researchers sidestep this problem by dropping any mention of the male mice from their “Conclusions and Implications.” The final sentence of the implications states, “This suggests that flavors in electronic nicotine-delivery systems significantly increase the risk of addiction-related behaviors among users of vaping products.” Obviously, the researchers have moved from male mice to humans because mice cannot be seen to be “users of vaping products.” And this move cannot, to my mind, be justified.

I have two other gripes with this research as it was described in the abstract. One is that it cannot be morally acceptable to conduct experiments on nonhuman animals so that human animals can pretend to learn a little more about the silly—pleasurable, but nevertheless silly—habit they have invented called vaping. If they want to learn about the effects of vaping on themselves, they should gird up their loins and carry out the experiments on themselves. And, of course, ditto all the other silly things that humans like to get up to. 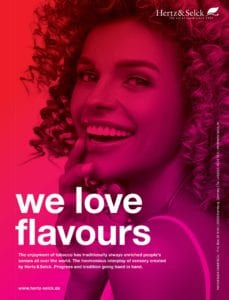 The second gripe is that the research is pointless. Basically, it ends up suggesting that flavors are attractive—at least to some, I presume. I mean, doh! And despite this, the researchers have the cheek to mention as part of their conclusion “the need [my emphasis] to continue investigating the role electronic nicotine-delivery system (ENDS) flavors play in vaping-related behaviors.” I don’t think so. I think the researchers are confusing “desire” with “need,” which is a little worrying if the object of the exercise is to study addiction.

But let’s leave the scientific world behind because, while I was intrigued by the heading quoted at the start of the abstract, I was astonished by one introducing a recent general story: “Illicit cigarette smuggling could be key to fighting PPE fraud.”The heading seems to imply there is a form of cigarette smuggling that is not illicit, that is licit, an idea I firstly dismissed as daft. But the heading kept nagging at my brain and I started to wonder whether the headline writer had a point.

My confusion arose, I think, because I realized that whereas licit can mean lawful, it can have a softer meaning—something like “allowable.” So, if I were entering a country with 1,000 cigarettes on which I had no intention of paying duty even though the country in question required local duty to be paid on personal imports of cigarettes greater than 100, I would be smuggling or attempting to smuggle 900 cigarettes.

I would be committing an unlawful act and liable to the penalties imposed by that country for such breaches of the law. But, as I understand things, I would be in the clear if I were a diplomat from another country and those cigarettes were in my bags, and in this case, I think that it would be arguable that I was smuggling in a licit or allowable way.

And perhaps we could take this further. It might be stretching a point, but let’s extend the meaning of “licit” through “allowable” to “reasonable.” In fact, it’s not that much of a stretch; after all, the U.S. Food and Drug Administration uses the word “adulterated” as a synonym for illicit, and therefore, I presume, uses the word “unadulterated” as a synonym for licit, so, as I understand it, a cigarette is licit if it is unadulterated—if it contains nothing not declared in its list of ingredients—even though consumption of that cigarette will have you inhaling no end of toxins—unadulterated toxins presumably.

In any case, let’s say my status has fallen on hard times and I’m no longer a diplomat but a gig worker being paid starvation wages so as to keep the multibillionaire owner of the company I work for in the luxury to which she has become accustomed. And let’s say that despite my lowly financial status, the government—with the help of the World Health Organization and its track-and-trace system (property, not people)—requires that I pay the same taxes on a pack of cigarettes as does the owner of the company. Might it be reasonable or licit in these circumstances for me to say, “you can stick your tax-paid cigarettes where the sun doesn’t shine” and take advantage of the services of my local smuggler?

After all, it cannot be reasonable—dare I say licit—that each of us pays the same level of tax on our cigarettes, and here’s why. Cigarette taxes are there, we are told, to discourage people from smoking, but it would be absurd to suggest that the same level of taxes would discourage me, the gig worker picking up $10,000 a year, and the multibillionaire, picking up $100 million a year.

To my mind, not only is the heading odd, but the story is too. At one point, we are told that the same networks developed to smuggle cigarettes and tobacco are now being used to perpetuate medical and personal protective equipment (PPE) fraud. This seems to imply that existing cigarette smuggling networks reach into the places where PPE is used: hospitals and care homes, for instance, and, frankly, I find this implausible. Surely, the networks that would be used, at least those at the sharp end of the supply chain, would be those that reach naturally into those facilities—perhaps those providing counterfeit drugs.

Once again, we seem to have a story that attempts to blame smokers for the evils of the world. And to me, this makes no sense because it allows us to ignore, and therefore not address, the real causes of PPE fraud: the inappropriate and often cruel interactions of human animals with nonhuman animals that give rise to zoonotic diseases; globalization and the free flow of goods and people from centers of such interactions to the rest of the world, which ensures the “efficient” spread of these diseases; the overreliance on the market economy that in the case of the current coronavirus pandemic meant that not enough PPE was available or obtainable at quick notice; and the poor or nonexistent due diligence performed by governments left exposed, by their own policies, to such shortages.

Address these issues and you are on your way to preventing PPE fraud. Approach the problem by trying to eliminate tobacco smuggling and you are at best going to put a dent in such trade, but you will leave yourself open to PPE fraud—and much else.

What has this got to do with you, a reader interested in issues about vaping? Well, the story seems to imply that not only are some smokers indirectly responsible for PPE fraud but that their actions could lead to a spike in the U.S. in the illegal trade in electronic and heat-not-burn cigarettes. I’m not sure, but I think the argument goes something like this: Tobacco regulation is causing more people to quit smoking, and some of these quitters are turning to vaping, which is the subject of a crackdown in the U.S. that will make licit vapor devices harder to obtain. Hence the predicted spike in the illegal trade in such devices.

Overall, the message seems to be that smokers should keep smoking but only tax-paid cigarettes because the illegal tobacco trade funds groups such as ISIS, the Irish Republican Army, Hezbollah and al-Qaeda. Once again, the smoker gets it in the neck for events that are so far out of her control that she might as well be blamed for sunspots.

There is not even an aside to suggest that the actions of ISIS, the Irish Republican Army, Hezbollah and al-Qaeda might be down to politics, ideology and the desire by governments, companies and shareholders to promote the sale of arms. There is no question raised about how much of the tax paid on a pack of cigarettes goes toward governments promoting arms sales. And there’s not even a whisper that religions might be playing a part in the activities of these groups. It’s all down to smokers who buy illicit cigarettes.

Is it? Of course not. Smokers are the victims. Many smokers are paid starvation wages in the gig economy and, we are told, are addicted to tobacco, so they are forced into the arms of smugglers when they can no longer afford the unreasonable tax and increased pricing demands made of them by governments and manufacturers. It is deeply unfair, or illicit, for manufacturers making billion-dollar annual profits to introduce several cigarette price increases in a year and then blame impoverished, addicted smokers for turning to the illegal trade and thereby supporting ISIS, or whatever. They need to examine their own actions.

In a fair or licit world, the solution would be clear. We don’t have to drag ISIS and the Irish Republican Army into the fight. And we don’t have to send researchers out with a brief to prove that sunspot activity is particularly prevalent directly above where smokers congregate outside pubs. We just have to charge a fair, or licit, price for cigarettes.

Of course, if your moral compass is able to lead you around experiments on nonhuman animals but runs you into a brick wall when it comes to allowing others to enjoy a cigarette, there is another answer—apart from trying to reset your moral compass, that is.

Encourage smokers to switch to vaping and other low-risk nicotine consumption, and definitely don’t discourage them from making the switch. And don’t get into the same fix with vaping as you did with smoking by piling on high levels of tax and creating a highly monopolized industry that is able to increase prices without due regard for the consequences of such actions.

What are the chances that things will change? Poor, I would say. I go along with whoever said that the one thing we learn from history is that we learn nothing from history.