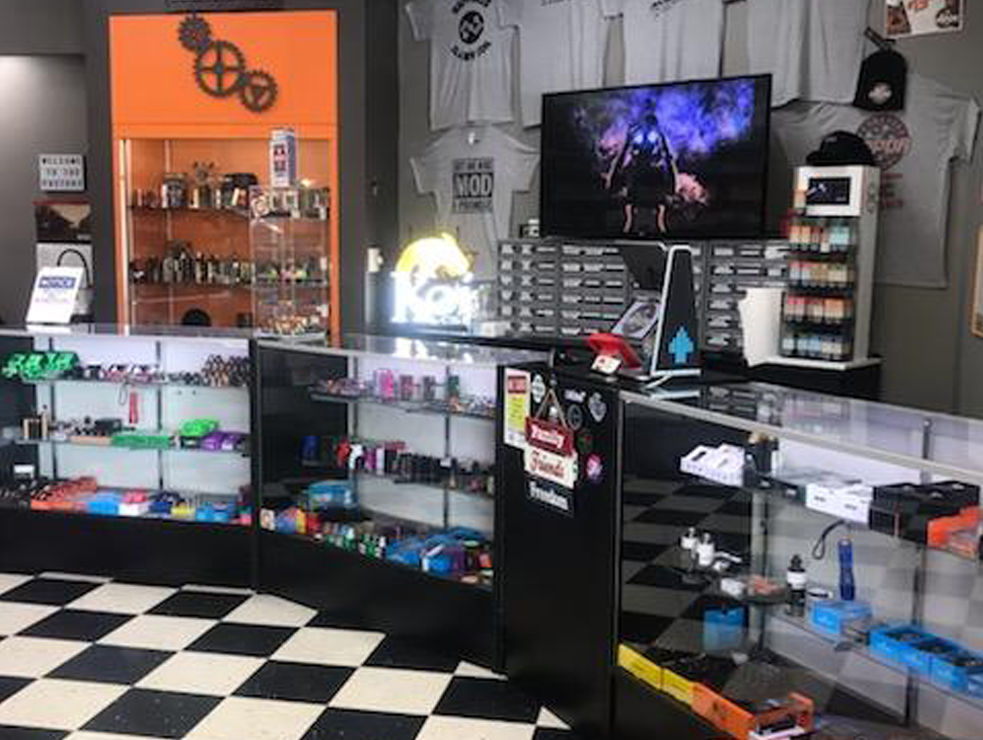 Following the PMTA deadline, vape shops are unsure what vapor products are legal to sell in the U.S.

On Sept. 10, vape shop owners in the United States faced a dilemma. Numerous hardware and e-liquid manufacturers in the electronic nicotine-delivery system (ENDS) industry were required to pull their products from store shelves. Any product for which the manufacturer failed to file a premarket tobacco product application (PMTA) to the U.S. Food and Drug Administration (FDA) by Sept. 9 is now illegal to market in the U.S.

Tim Scarborough, general manager for Tennessee Vapor Factory, with several stores in Tennessee, said that after talking with distributors, he removed thousands of dollars in product from his store shelves. “It was a straight-up loss. We estimate it to be probably upwards of $10,000,” he said. “We haven’t gotten final figures, but it was [a] large sum.”

As for ordering new products, Scarborough says that many manufacturers and distributors have lists of products for which they have filed PMTAs. Those are the products Scarborough’s shop is trying to keep in stock. “It’s getting harder. We are having to do research to figure out if some of these products filed as well,” he says. “The selection, variety of product, is really minimal right now. We don’t even know for sure the FDA is going to approve a product. I think that, in the long run, this will push people back toward cigarettes.”

During the Global Tobacco & Nicotine Forum (GTNF) held virtually in September, a representative of a large vapor industry distributor told Vapor Voice that his retailers had no way of knowing exactly what products are legal, so they have been selling off the product currently on shelves but have been weary of ordering new product. The distributor did not want to be named due to fears of potential FDA reprisal. 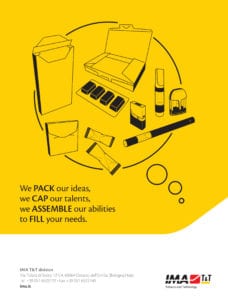 “I’ve had retailers call and say they have lost 50 percent of their juice wall because of the companies they know didn’t file PMTAs. Shop owners have been asking for a letter of acceptance and maybe even a list with all the SKUs for the files we have submitted,” he said. “Retailers don’t want to incur fines for selling illegal products, but how can we even as a distributor know if a company has filed a PMTA? How many products have even been filed? I saw something the other day where the FDA was expecting 2 million PMTAs. A vape shop in Texas had 333 submissions. Beard e-liquids had 72. We submitted 105, but its more than that if you break it down into the different flavors and nicotine strengths. If we broke down our submission like that, it’s about 7,000 PMTAs. It’s really hard to know what exactly the FDA is doing.”

Many manufacturers and retailers have closed their businesses due to the cost of submitting a PMTA and the uncertainty surrounding the industry. NicVape, BlueDot Vapor and Stash E-liquids did not submit PMTAs, for example. A note on Illinois-based e-liquid manufacturer Level Up Vapor’s website reads only, “Closed; We are no longer accepting orders.” In a letter to its customers, VapeWild, explained it would not be submitting PMTAs and was shutting down. The company had been in business for six years and was a favorite of vapers worldwide.

“The PMTA deadline is finally upon us … It’s been a long road, and we did our best, but in the end, we just aren’t able to pull it off,” VapeWild wrote. “These are crazy times we’re living in, and they just keep getting crazier,” the letter states. “Our sincerest hope, though, is that we have somehow made a difference in the world for the better.”

Only a small number of the thousands of vapor companies in the U.S. have announced that they filed PMTAs by the deadline. Complicating matters, most of those companies have not released what devices or e-liquid flavors they have filed. So far, based on Reddit posts, press releases and media reports, just over 100 companies stated they have filed a PMTA or had the intent to file before the deadline. Just over 50 companies announced they had filed an application before the deadline. Even fewer revealed that the PMTA had been accepted by the regulatory agency. All the major tobacco companies in the U.S. have a PMTA currently accepted, filed and under review for a vapor product.

Once an application is sent to the FDA, manufacturers are permitted to sell their products for a year unless the agency acts. So far, Philip Morris’ heated-tobacco device IQOS and Swedish Match’s General snus are the only two tobacco brands to have survived the PMTA process.

And the process does not end with marketing authorization. After receiving a PMTA, a company must continue to conduct postmarket surveillance and studies to determine the impact the orders have on consumer perception, behavior and health and to enable the FDA to review the accuracy of the determinations upon which the orders were based. These postmarket requirements also include a rigorous toxicity study using computer models to help predict potential adverse effects in users, according to the FDA. The orders also require the company to monitor youth awareness and use of the products to help ensure that the marketing of the products does not have unintended consequences for youth use.

In July, the director of the FDA’s Center for Tobacco Products, Mitch Zeller, said the agency would prioritize policing vapor products aimed at youth. However, the Covid-19 pandemic has put vape shop inspections on hold, according to Zeller, adding that no date has been announced for when in-person inspections would begin again.

“All the entities that we have contracts with have state level for activities like compliance checks and vape shop inspections,” Zeller said in July. “With that stop-work order, we’ve temporarily postponed all in-person inspections of tobacco retail establishments, but we continue to do all of our monitoring and surveillance and websites and publications and social media because we can do that remotely and have always done that, if you will, remotely from offices.”

Speaking at the virtual GTNF in September, Alex Clark, CEO of the Consumer Advocates for Smoke-Free Alternatives Association (CASAA), said there is a lot of uncertainty right now not just in what types of products will get acceptance letters but also how quickly the FDA will be able to bolster enforcement. This, at a minimum, gives retailers a little leeway. If regulators can’t inspect stores, then retailers can still sell products if the FDA hasn’t previously stated that a product is illegal. 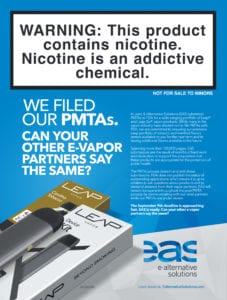 “Because there is this lag in enforcement, there [are] still [illegal] products on store shelves,” said Clark. “[The regulatory environment in the U.S.] is bad … we are concerned that [the U.S. is] exporting our bad policy ideas and our bad science and bad campaigns. In New York, for example, bad science … helped change people’s minds and vote to advance the flavor ban language.”

In a press note on Aug. 31, Zeller wrote that the FDA plans to make publicly available a list of the deemed new tobacco products that are subject to the Sept. 9 deadline and that were on the market as of Aug. 8, 2016 (it had not been released as of this writing). “However, before doing so, we will need to ensure that the publishing of any such information complies with federal disclosure laws and regulations as only certain types of product information from applications can be lawfully disclosed,” Zeller wrote.

This has left retailers in limbo. Shop owners don’t know if a product they are selling could make them a criminal. Zeller stated that the agency knows of more than 400 million deemed products. To date, the FDA has received applications for around 2,000 products, he said, adding that the agency has processed 40 percent of those. Zeller did not specify how many of those applications were for vapor products. Zeller acknowledged that the FDA was unlikely to be able to review that many applications in the year timeline set for their review.

“Even if applications are submitted for only a portion of those products, the likelihood of [the] FDA reviewing all of these applications during the one-year review period is low given that this would be an unprecedented number of applications and several orders of magnitude greater than anything the agency has experienced,” Zeller wrote. “Depending on the number of new applications we receive by the deadline—which could be anywhere from a few hundreds of thousands to millions—as a matter of practicality, we may not be able to fully complete review of all tobacco product applications that we receive by Sept. 9, 2020, within the year.” The FDA has not announced how many products filed PMTAs.

Zeller also stated that the agency was willing to work with manufacturers. The FDA has said it could allow some smaller manufacturers to submit a “deficient” PMTA and keep marketing products until the necessary data is collected. He said the FDA would accept several justifications for such applications, such as the Covid-19 pandemic and a limited amount of lab space for testing. “Although we expect high quality and complete applications to come in by Sept. 9, if we do find deficiencies, it is likely [the] FDA will issue a deficiency letter with a 90-day deadline for companies to respond,” Zeller wrote.

Orion Saith, with Smoque Vapours Electronic Cigarettes in Chicago, says that her store had already destroyed most of their disposable products because of Chicago’s ban on flavored vapor products. The company is still selling mix-in flavors for e-liquids and has its own line of e-juices as well. “We haven’t taken any juices off the shelves yet. We have our own juice line, and those PMTAs were submitted to the FDA, so we are doing OK for now,” said Saith.

Finding hardware, however, has been extremely challenging. Saith says that knowing what products are legal to sell while PMTA submissions go through the process is getting more difficult by the day. “It is very difficult. We have been getting whatever we can that is still in stock from wholesalers who say that the devices are legal,” she said. “It involves a lot of trust. We have been asking to see submission letters from the FDA too. What’s concerning is that as some of these large major brands leave shelves, the consumers are the ones who suffer. If you can’t get a quality device, you probably end up going back to cigarettes. That’s just a horrible thing to force on someone.”

The FDA has been sending notices to companies selling illegal products. In late April, the FDA issued 10 warning letters to retailers and manufacturers who were selling, manufacturing or importing unauthorized ENDS products that “were clearly targeting use, or likely to promote the use, of these products by young people.” The agency sent three more notices on Sept. 9, the same day PMTAs were due. Zeller said the agency will continue to send warnings.

“All told, since our compliance and enforcement program began in 2010, we have completed over 1.2 million retailer inspections. This has resulted in over 97,000 warning letters, over 11,000 of which were for illegal products,” said Zeller. Many experts predicted the vapor industry would come to end after the PMTA deadline. For now, at least, it will continue.