A photo purportedly showing a 510-threaded e-liquid tank for delivering Pfizer’s Covid-19 vaccine is talking the internet by storm. The photo and product are a hoax. It was widely shared humorously as early as Dec. 19, however, recently some social media users have reported the meme as true. 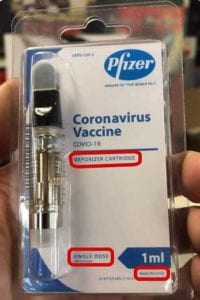 The photo being shared shows a package containing a cartridge that would be used in an electronic cigarette and inhaled as a vapor (here). It carries Pfizer-style branding and is described as a “single dose” vaccine cartridge. There are signs the label was printed as a joke; the box describes Pfizer as “makers of ‘the boner pill’”.

While most shares of the image appear to recognise that the product is not real, it nonetheless generated confusion for some, according to Reuters. A string of social media users shared the image with captions such as “Could this be fake?”, “Can you escape the RESET?” and “Why’s the Pfizer vaccine made in China?”, the latter comment being in response to text on the fake package reading “MADE IN CHINA”.

The real vaccine is being made using Pfizer and BioNTech’s combined manufacturing network in Germany, Belgium and the United States, the story states. Reuters contacted Pfizer who confirmed by email the vaporiser cartridge was fake. The real Pfizer vaccine is injected into the upper arm and given as two doses 21 days apart.