Char Owen and Amanda Wheeler knew the enormous uphill battle other vape business owners would face when pulling together their premarket tobacco product applications (PMTA) for the U.S. Food and Drug Administration (FDA). After all, the PMTA process—which the FDA has foisted on thousands of small business owners—had been built for billion-dollar tobacco manufacturers. Every flavor in every nicotine level—even the smallest differences—needed its own PMTA, and each PMTA cost hundreds of thousands of dollars.

Add it all up, and some manufacturers had to submit PMTAs for more than 2,000 products. The costs will be astronomical—estimated in the hundreds of millions. Aside from the costs, there’s another huge hurdle: Very few vape business owners have information technology experts or paid scientists on staff—the kind of expertise necessary to submit the extensive paperwork required by a PMTA.

And what about the help for small businesses that the FDA promised? It never arrived. So Owen and Wheeler stepped up to help their colleagues. After downloading the complete list of manufacturers from the FDA site, they called each and every one to announce their new group, simply called PMTA Sharing.

Ultimately, the group grew to 1,700 members, including vape businesses all across the country as well as several suppliers that offered to pitch in to help business owners through the PMTA process. The group’s services are completely free; the only fee members pay is for environmental assessments or cover letters and forms created by industry attorneys.
Thus far, the PMTA Sharing group has helped more than 200 businesses submit PMTAs for 1.7 million products. But Owen and Wheeler didn’t stop there.

Vapor Voice: Tell me more about your vapor businesses. How have your businesses fared over the years?

Owen: I own two brick-and-mortar vapor shops as well as a very small wholesale line. We started in 2013 as a labor of love dedicated to my father whom I lost from lung cancer in 2001. I’ve since gained more friends in my little town of Seguin, Texas, than I can count. We all have one common goal—keep people away from combustible tobacco.

We lost some sales due to the EVALI (e-cigarette or vaping product use-associated lung injury) scare, but thankfully most did not return to smoking, and those who did are slowly returning to vaping. Our retail lobby had to close during the shutdowns in Texas, but I fought extremely hard and was able to at least keep curbside service available. So while we lost a bit of sales, we didn’t have to close. We are grateful, as many others were not so lucky.

Wheeler: I own Jvapes E-liquid, founded in 2011, headquartered in Prescott, Arizona, with stores in Arizona, Colorado and Oklahoma. We also sell online at www.jvapes.com and wholesale at www.wholesalejvapes.com.

Both my husband and I are former smokers who quit with vaping. At the time, vapor products were not widely available in our local community. We started out with a tiny 400-square-foot store, but the response to vapor products was so positive, our business quickly grew into what it is today. 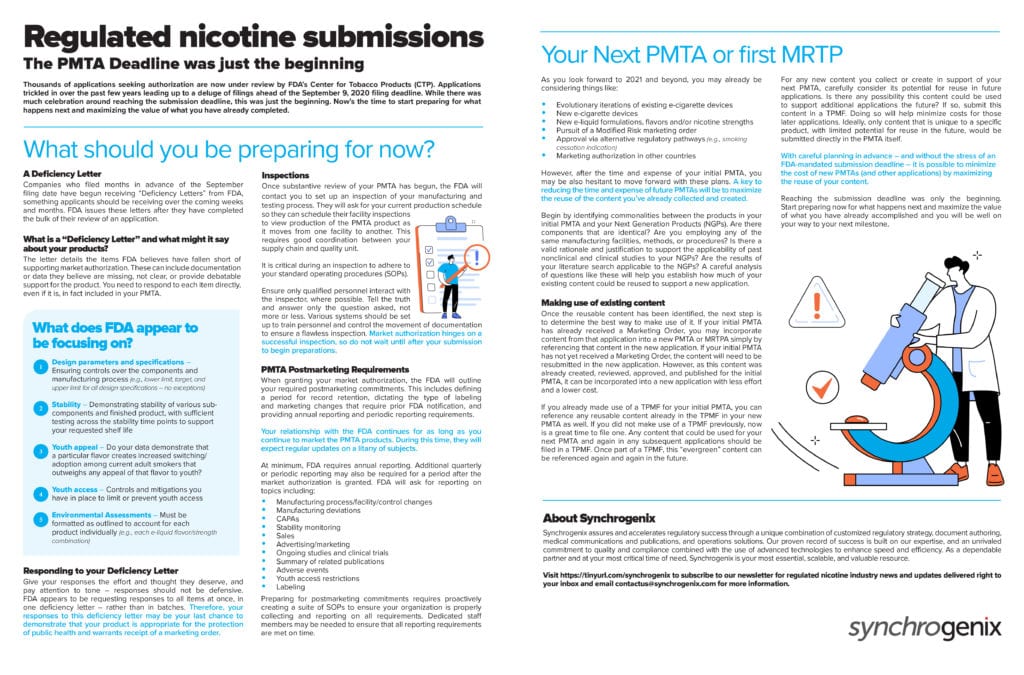 With the exception of late 2019 and misinformation surrounding EVALI, our business has fared very well over the years as people have seen for themselves the effectiveness and positive change from vaping. Our target audience are cigarette smokers, age 49 on average, who have not been able to quit by other means. We learned during our PMTA data collection that 83 percent of our customers have quit smoking entirely.

Have you been involved in vape advocacy?

Wheeler: I am the president of Rocky Mountain Smoke Free Alliance, our Colorado trade association. I’m also executive director of the Arizona Smoke Free Business Alliance where I’ve worked on everything from vapor taxes to flavor and public vaping bans to licensing. Prior to starting AVM, I was involved in federal advocacy for PMTA reform where we spent over a year lobbying Health and Human Services [HHS] to have small business PMTA applications accepted.

When and why did you start the PMTA Sharing group?

Owen: I was in the process of doing my own PMTAs. As a 20-year computer engineer, I had an extensive history in document replication and information technology, so I knew I could create the documents I needed. But I also knew that most small businesses did not have the same ability. Most could not even use Microsoft Excel.

I started the PMTA Sharing group on Feb. 17, 2020—a significant date for me because it was my son’s birthday. I lost my son in 2013 just a few weeks before we opened our first brick-and-mortar store. I tried many times to help him quit cigarettes but was never successful.

So after filing our own PMTAs, we created applications for other businesses to create and file their documents and then held Excel training classes. We even did computer support when their machines were unable run the applications, implemented a Microsoft OneDrive for data collaboration, and created training videos and step-by-step instructions.

Wheeler: I began advocating for a streamlined PMTA process for small businesses. I knew that my business as well as my state’s group members and most independent vapor manufacturers would not have the financial resources to complete the full PMTA process. Without significant changes to the process, only large corporations would survive PMTA regulations.

Does the work keep you up at night?

Owen: Helping the group submit PMTAs was a monumental undertaking, requiring 14[-hour] to 16-hour workdays most of the time. It has taken a toll on both my physical and mental health.

We put as much effort as was needed to make sure no one would be left behind. We’ve received tons of feedback [see testimonials] and gratefulness for our group. They now have hope that their small businesses can continue to help people who have quit and those who want to quit smoking.

It’s an amazing feeling when you’re walking in your town and someone who has smoked for 30-plus years recognizes you and gives you a hug because they can finally live a life away from combustibles. We all feel that same joy with each and every person who puts down cigarettes.

I remember one lady who called me to thank me, explaining that if it wasn’t for our group, she would have no means to support herself and her two-year-old daughter. Of course that makes me happy, but also very angry that the FDA put her in that situation and treated her as if she was a big tobacco business with all the resources necessary to meet their requirements.

The FDA has publicly acknowledged that the costs associated with the PMTA process may be challenging to small businesses and that many would go out of business. That is not how our government is supposed to operate.

What else do people in the vapor industry need to know that would help and motivate them?

Owen: We are optimistic that we will complete this process through sheer determination. While we don’t expect help from the FDA, the HHS has been willing and open to listen to our challenges.

We hope to move the group through to the testing phase and move the membership to the AVM. We have accomplished the monumental task of completing the first part of the process. It will be difficult, but we will move as many small businesses through the entire process as soon as we possibly can.

Our colleagues in the vapor industry need to know that we will not stop fighting for them. We understand what they are facing better than anyone. We are them. There is no one better to fight for small manufacturing than small manufacturers. Our hearts are fully invested in this industry.

Wheeler: I am optimistic. We have a very solid plan and approach, and we have the right scientific, legal and lobbying expertise to get the job done. Many passionate and dedicated individuals are on the AVM board, guiding our organization in the best interests of small businesses.

We are unified and moving together toward the same goal, and I believe we have a recipe for success.