The Montana Senate heard a measure to limit local government and the Department of Public Health and Human Services from regulating vaping products this week. Bill sponsor Rep. Ron Marshall (R-Hamilton) says vaping and alternative nicotine products are meant to get people away from tobacco. 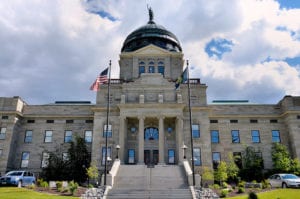 Proponents say House Bill 137 would keep small businesses open by stopping counties from introducing flavor bans on vape products, according to NBCMontana. Opponents say these products aren’t any less dangerous than cigarettes and are too easily accessible to minors.

The bill Marshall proposed is House Bill 137. According to the official legislation, House Bill 137 will prevent and stop any further regulation on nicotine and vapor products by local and county governments. Health Boards and the Montana Department of Public Health and Human Services are also prohibited from further regulating flavored e-cigarettes and vapor products unless the policies match entirely different regulatory standards that deal with non-tobacco and non-combustible nicotine-containing products.

Marshall, a vape shop owner, and his business partner are former members of the Montana Smoke-Free Association. This bill moves to executive action, when the committee will vote whether to send it to the Senate floor.