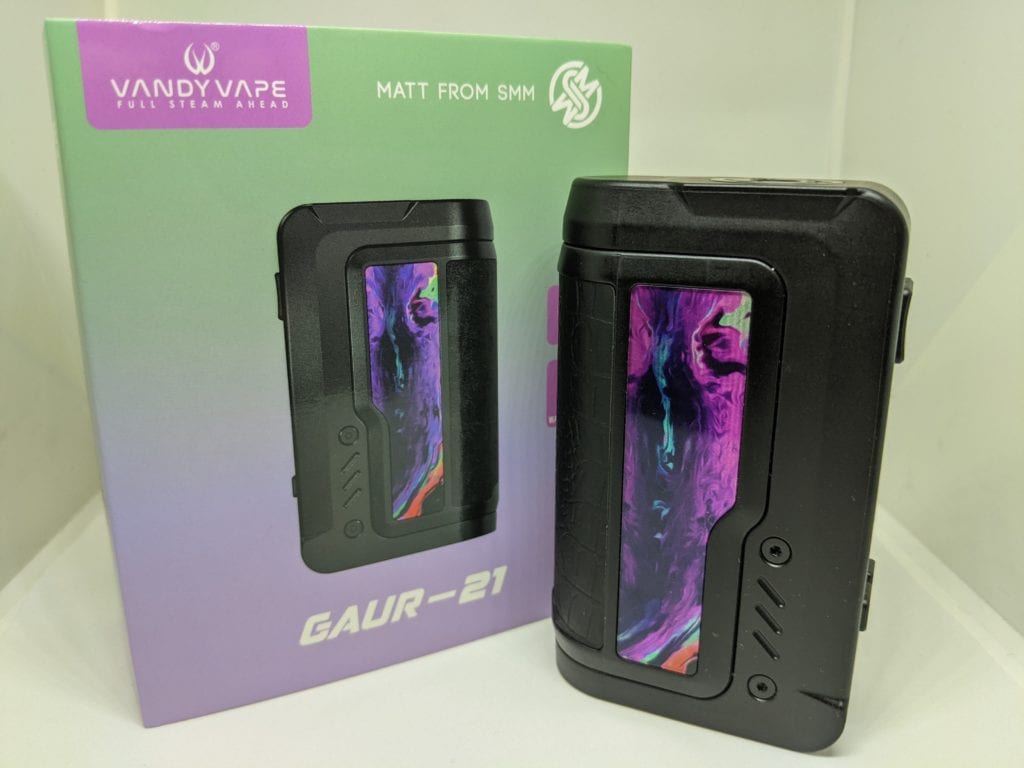 The Gaur-21 provides all the expected features in a high-end device without a burdensome menu design.

The Gaur-21 from Vandy Vape is a beast. There are no mincing words. It is a high-power series mod with the entire gamut of features expected from top-end devices. With design input from Matt from SMM, the Gaur-21 perfectly streamlines high-end vaping into a robust and straightforward experience at only a modest price point.

The Gaur-21 features three-button operation with a built-in menu system that is concise and intuitive, allowing each user to adjust settings quickly and easily with few ambiguous prompts. A standard 510 connection ensures compatibility with most any type of atomizer, including sub-ohm tanks and rebuildables. The mod itself is quite lightweight, but when batteries are installed, it can become weighty to the point that it feels solid but not cumbersome. While 18650 batteries can be used with the included adapters, the Gaur-21 truly shines when used with high-quality 21700 batteries. The battery door pulls off easily and is held in place with magnets, but the batteries can be charged within the mod via an included USB type-C cable.

Any vaping style is permitted with the Gaur-21, from low-wattage mouth-to-lung vaping to massive cloud-chucking lung hits. With a range of 5 watts to 200 watts, no atomizer is out of the question. Atomizers with resistances as low as 0.05 ohms can be used, and the mod supports an output current of up to 50 amps, so there is little need to worry about the mod limiting the output when low resistances are combined with high wattages. While pure power is certainly an attractive feature, temperature control is also perfectly viable as well, with a standard temperature range of 200 degrees Fahrenheit to 600 degrees Fahrenheit (100 degrees Celsius to 315 degrees Celsius).

The build quality is also something of note. The Gaur-21 has a rubberized finish on most of the exterior with portions of the battery door available in multiple colors and a more textured, rounded back for comfort. When assembled, there is absolutely no rattling, and there are no loose-feeling elements. Dust and excess e-liquid are easily cleaned from the rubberized surface, and fingerprints are a nonissue. In terms of pure aesthetic quality, there are no complaints. 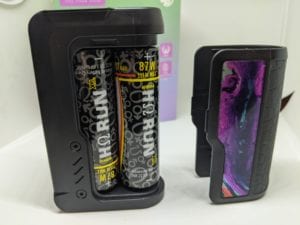 The 510 connection is slightly off-center with airflow channels on the off chance that the connected atomizer receives airflow through its 510 connection. The asymmetry of this design favors finger firing rather than thumb firing, but both methods are equally comfortable. The screen lies on the atomizer side of the mod and is illuminated in full color, which not only looks nice but makes it much easier to distinguish between various screen and menu icons.

Lastly, pressing all three buttons at the same time will activate or deactivate stealth mode, blacking out the screen but still allowing the device to function. Vandy Vape has not omitted any functionality, and these menu shortcuts allow quick and easy access to the most-used tools.

During and for a short time after use, the screen displays all the standard useful information one could want to know briefly. Current output setting, battery life on a per-battery basis, atomizer resistance, output voltage, puff count and vape time. When the menu shortcut is activated, a vertical list of icons appears, each corresponding to a set of features or options. These include output settings, standby sleep time, screen brightness, puff count reset, UI color, firmware version, a QR code to download the optional mobile app, temperature control options to adjust the cooling value and coefficient and a factory reset. These are mostly self-explanatory.

The temperature control settings allow TC aficionados the ability to really fine-tune the functionality to try and dial-in the perfect vape. The mobile app is handy for anyone who likes to tinker with their settings on a regular basis but finds the built-in system a bit too cumbersome. The first icon, settings, will be the most useful to most vapers.

Within the settings menu, the user can change which modes can be selected from the main screen. For example, if a particular vaper is partial to wattage vaping only, they can turn off temperature control, bypass and variable voltage mode entirely. These options will no longer be available from the main menu, which is great overall for simplifying.

Alternatively, if someone likes to switch between wattage mode and bypass mode, they can turn off temperature control mode and all its associated features to more easily switch between the modes that are most used. This is also the menu option that allows the user to dictate whether the lock function disables the fire button. Many mods have a lock function that prevents the device from firing, but this is in addition to the five-click on/off feature, which is also present in the Gaur-21. So instead of having two different ways to functionally turn the device “off,” the user can choose to lock the device at a certain wattage, voltage or temperature setting while still retaining the ability to fire the device.

The settings menu also allows the user to determine if new atomizers are automatically detected. Depending on the mode used, this can be useful for “locking” the atomizer resistance in place. Particularly in temperature control modes, this can ensure a more consistent vaping experience. Finally, the user can choose to have the mod disconnect from the mobile app automatically when the device is turned off. 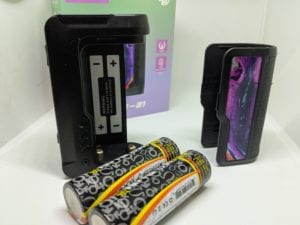 In addition to adjustment functionality, the mobile app can also push firmware upgrades to the device, which is generally far easier than plugging it into a PC with a USB cable and upgrading through proprietary software or awkward button combinations. Most notably, the Gaur-21 app features a lost-and-found feature. If the mod is ever lost but is connected to the app, the user can use their phone to ping the mod, causing it to beep repeatedly until turned off. For anyone who has ever panicked over the prospect of losing their vape, this feature is a godsend.

The Gaur-21 provides all the features one would expect from a high-end device and then some, and it does so without overly burdensome menu features. In fact, one of the main features is to disable features that aren’t used in order to become even more straightforward! But a main feature that shouldn’t be overlooked is inherent to the nature of the mod, and that’s compatibility with 21700 batteries. 21700 batteries are truly a treat. With only a marginal size and weight increase over 18650 batteries, 21700 batteries have significantly more battery life and a consistently higher amp limit. That means safer batteries that last longer. High-quality 21700 batteries can easily achieve over 4,000 mAh and still retain a continuous discharge rate of over 30 amps.

That’s impressive even for a 26650 battery, which have generally fallen out of favor due to the extremely large size. Now, that performance can be had even in devices that aren’t necessarily larger than those that use 18650 batteries. For mouth-to-lung vapers, that means that 10 watts to 30 watts can be maintained for days without needing to charge the batteries, and for lung-hitters, higher wattages can be attained for longer periods of time with much less stress on the batteries.

The Gaur-21 doesn’t exactly reinvent the wheel, but it makes a strong case as a flagship mod targeted at intermediate to advanced vapers. Operation is simple yet exhaustive, catering to every vaping style. Build quality is fantastic with that sought after “tacticool” look, unapologetically inspired by the Aegis Legend, and the option to use 21700 batteries is a game-changer.

It may seem like a small thing, but for anyone who wants the benefits of a multiple-battery series box mod and isn’t phased by the larger size, 21700 batteries offer increased battery life, power and safety with virtually no negatives. The Gaur-21 is undoubtedly a mod worthy of the advanced, high-power mod throne in any product lineup, successfully capable of offering most any function to any vaper.