It has long been anticipated that the tobacco monopoly in China would one day regulate electronic nicotine-delivery systems (ENDS). On March 22, China’s Ministry of Industry and Information Technology (MIIT) and the State Tobacco Monopoly Administration (STMA) released a draft proposal to overhaul rules governing the ENDS market.

Shares in RLX Technology, parent to China’s market-leading RELX e-cigarette brand, plunged in the wake of the announcement. Just two months after the vapor maker’s billion-dollar debut on the New York Stock Exchange, RLX shares fell by nearly 45 percent to $10.69 per share on March 22, having reached a high of $19.46 per share on March 19.

An online copy of the “Decision on Amending the Implementation Regulations of the Tobacco Monopoly Law of the People’s Republic of China” suggests the government intends to regulate ENDS like ordinary cigarettes. That could mean special licensing requirements and much higher taxes of up to 65 percent instead of the 13 percent value-added rate companies currently pay. The ministry is seeking public comments on the draft regulations until April 22. The implications of the draft regulations could be far-reaching. With an estimated 300 million smokers, China is the world’s largest potential market for vapor products.

“In view of the homogeneity of new tobacco products such as e-cigarettes and traditional cigarettes in terms of core ingredients, product functions and consumption patterns, new tobacco products such as e-cigarettes shall be implemented in accordance with the relevant provisions of the Regulations on Cigarettes,” the draft proposal states. “The implementation … will greatly enhance the effectiveness of e-cigarette supervision, effectively regulate e-cigarette production and operation activities, solve the product quality and safety risks of e-cigarettes, false advertising and other issues, and effectively protect the legitimate rights and interests of consumers.”

While the news will have some impact on the global ENDS market, the Chinese manufacturers producing for international markets will likely continue operations. “Depending on how they regulate and to what extremes, it could be devastating to the companies operating in the consumer market in China,” said a representative of a major China-based ENDS manufacturing company, who asked for anonymity. “We expect that there will be players that remain in the market, possibly working alongside the Chinese government in the promotion and sales of vaping products. Right now, we are just waiting for a better understanding of what this means for China’s domestic market. A worst-case scenario would be an outright ban on all products, but this is unlikely.”

The draft proposal states that the regulations will have three purposes:

There are 350 million smokers in China. The country consumes an estimated 1 trillion cigarettes per year. As the largest cigarette market in the world, it would make sense for China to embrace vapor products as a less risky alternative to combustible tobacco. However, with a state-run tobacco monopoly and billions of dollars of taxes at stake, industry experts say the Chinese vapor market is complicated and slow to implement regulations.

Despite impressive growth, China’s vapor market is still insignificant compared to its tobacco market. As of the end of 2019, an estimated 7.4 million people in China were regular e-cigarette users, according to Cloris Li, a spokesperson for Smoore International, parent to FEELM and the Vaporesso brand. 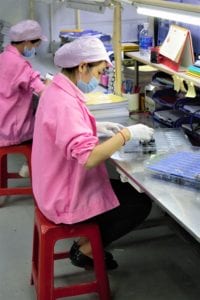 “That means the electronic cigarette industry in China can still potentially convert a large number of smokers,” said Li. “Considering China’s status as the biggest tobacco market, it has enormous potential to continue the current rapid growth rate. In 2018, Chinese e-cigarettes and auxiliary products had a market size of CNY5.52 billion [$848.38 million], and it is predicted to grow more than double to CNY11.28 billion by 2022.”

Vaping products in China are not considered tobacco products like they are in Europe and the United States. Instead, e-cigarettes are considered a consumer goods product. During the E-Vapor and Tobacco Law Virtual Symposium, sponsored by the law firm Keller and Heckman, two industry experts discussed the current vaping and tobacco market in China. One speaker noted that because e-cigarettes do not fall under the definition of tobacco as defined under the country’s monopoly laws, China, at the time, had yet to implement any major restrictions on vapor products.

With little regulatory guidance, China’s vapor market has been booming both in terms of domestic consumption and manufacturing exports. China, where the modern e-cigarette was invented, has become the manufacturing hub of the fast-growing global vapor industry. This has led to the rise of several major corporations, including the world’s most valuable vapor company, Smoore International.

When Smoore went public in mid-2020, its stock grew by nearly 150 percent on its opening day of trading on the Hong Kong Exchange. Smoore stock did not suffer after the MIIT announcement. The value of Chinese e-cigarette maker RLX Technology, parent to the RELX brand, jumped 146 percent during its trading debut in January 2021 after raising $1.4 billion in its U.S. initial public offering, before dropping drastically after the MIIT announcement.

In its prospectus, RLX stated that vaping products only have a 1.2 percent penetration rate in China compared with 32.4 percent in the U.S. The Electronic Cigarette Industry Committee estimated China’s 2020 e-cigarette sales at CNY14.5 billion, an increase of 30 percent from 2019 (CNY11.2 billion). By comparison, the U.S. e-cigarette market in 2019 was worth $5.34 billion and is expected to reach $6.50 billion in 2020, according to Grandview Research.

RLX is doing its part to accelerate e-cigarette sales in China. In early 2020, the company launched its two flagship RELX vape shops in Shanghai and Beijing. Today, RELX has partnered with 110 authorized distributors to supply its products to over 5,000 RELX-branded partner stores and over 100,000 other retail outlets nationwide, covering over 250 cities in China, according to its prospectus. Revenue for the company nearly doubled in the nine months ended Sept. 30, 2020, to $324 million, with a net income of $16 million.

Along with the Smoore and RLX initial public offerings, China’s vaping industry continues to attract lots of attention from the capital market, according to Li, it is unknown if the proposed regulations will hamper that attention. “This year, in 2021, many more second-tier brands are spearheading efforts to acquire financing to expand the market [in China], especially markets in lower tier cities,” Li said. “For example, MOTI intends to invest cny1 billion to open 10,000 stores. Snow Plus even announced its intent to distribute future stock shares to distributors to open more stores.”

To date, the Chinese government has passed two major pieces of legislation for vapor products. In 2018, it made it a crime to sell a vapor product to anyone under 18 years of age. In November 2019, the government prohibited online sales of vapor products to prevent youth initiation. In 2020, the country passed the Law of the People’s Republic of China on the Protection of Minors. That law is aimed at preventing parents or other guardians from “indulging or instigating minors” to smoke or vape.

The Chinese government wants to avoid the rapid rise in youth vaping that occurred in the U.S. If the U.S. figures replicated domestically in China, it could harden Beijing’s stand on the category, according to a 2021 report from ECigIntelligence. For now, e-cig usage among Chinese youth remains relatively low. A 2019 survey by the Chinese Center for Disease Control and Prevention found that 8.6 percent of high school students aged between 15 years and 18 years in China had used “tobacco” products during the previous 12 months.

Between July and August 2020, authorities collected comments on a bill that would restrict the public use of e-cigarettes nationwide and establish specific areas where vaping would be allowed. “The amendments to the Law on the Protection of Minors would prohibit vape stores from operating near schools, ban e-cigarette sales to minors and vaping in schools, kindergartens and anywhere else where young people are gathered,” the report states. “The bill would also require vendors to ask for an identification document if in doubt about a purchaser’s age while shop owners would be required to put up a prominent ‘no sales to minors’ sign. If the proposals are adopted and e-cigarettes are regulated under the same umbrella as traditional tobacco products, it would be China’s first national law specifically restricting e-cigarettes.”

In 2020, the Chinese government also floated the idea of banning vapor products completely. Another proposal suggested that e-cigarettes should be regulated as tobacco products while prohibiting their promotion as smoking cessation products. The authors of the study point out that Chinese rules can impact a market virtually overnight. Prior to the country’s ban of online sales of vapor products, there were hundreds of thousands of products available on the internet. The day after the announcement, an online search for e-cigarettes would have yielded zero results. “When the authorities do put something in writing and announce something that they want to put into effect, it can happen oftentimes almost immediately,” the report states.

While the Chinese government is yet to release any vapor regulations concerning components and manufacturing, several industry players have come together to self-regulate the industry. In 2017, draft regulation or standards were developed on the industry level. While not mandatory national standards, the rules give a good sense of what the industry considers sensible in terms of specifications, requirements and limitations.

“The same holds true with the group standards concerning the raw materials, about the diluents, the flavorings, and some requirements as it relates to physical, chemical, hazardous substances. They go into some test methods,” a presenter at the Keller and Heckman seminar said. “Not always, but typically, the authorities will look at these group standards, voluntary standards, and start to adopt some of that language when they make mandatory national standards. So, having a good sense of what these [recommended standards] look like … that would be important.”

Further complicating China’s vapor market is the China National Tobacco Company (CNTC), the state-run tobacco monopoly. If the monopoly chooses to enter the vapor market, it could devastate the independent vape shops that proliferate the Chinese market. “The state monopoly has yet to signal clearly how it will regulate e-cigarettes or whether it will sell them. If it does, it has the power to regulate its competitors out of the market,” the report states.

The industry is acutely aware of this risk. In a November 2019 interview with Reuters, one investor in a Chinese e-cigarette startup compared the combined regulatory and competitive threat posed by CNTC as “a knife on the neck.” CNTC is a source of major funding for the Chinese government. Its contribution accounted for an estimated 5.45 percent of the country’s tax revenue in 2018. That amounts to cny10.8 trillion, according to media reports.

If CNTC were to enter the vapor market, the monopoly’s existing 5 million domestic retail outlets could present a major challenge for private vape shop owners. Kate Wang, CEO for RELX, told Reuters (before the draft regulations were announced) that she’s “not worried” about the government’s impact on the sector. The products will continue to remain available, she said, “as long as there’s proof that this is a good solution for smokers.”