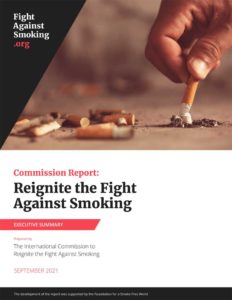 New technologies that deliver nicotine without combustion present a substantial opportunity to end the death and disease associated with tobacco use, especially in low-income and middle-income countries (LMICs), according to the International Commission to Reignite the Fight Against Smoking.

In a new report, the commission offers facts, analysis and recommendations aimed at reinvigorating an effort that has stalled, “mired in an outdated paradigm that has been superseded by new technology, new ideas and new concerns for neglected communities.” The fact that there are still more than 1.1 billion tobacco users worldwide proves that the fight against smoking requires new ideas and ambition, its members note.

Among other recommendations, the commission calls for risk-proportionate tobacco policies and better access to harm reduction in LMICs (where most smokers are located). It also encourages medical bodies to reestablish the leadership role of doctors in ending smoking and urges tobacco companies to have a clear plan to phase out high-risk combustible products.