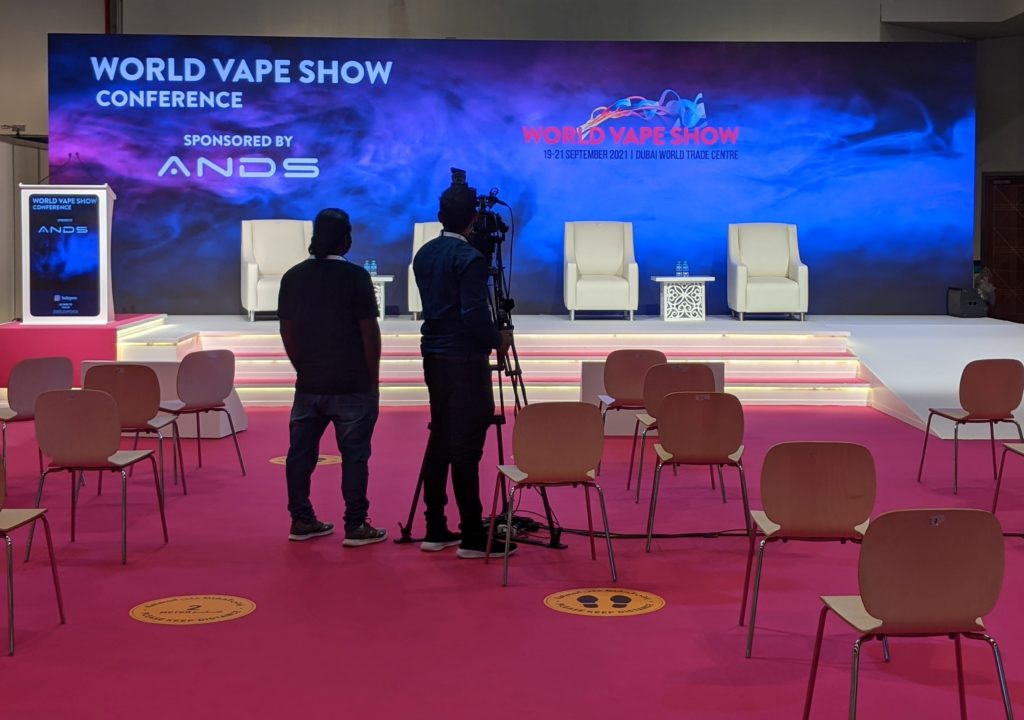 QBM pulls off a remarkably successful vaping exhibition in an uncertain environment.

Story and Photos by Norm Bour

It’s not often that a rookie gets a chance to come up to the plate and hit a Grand Slam home run, but that is exactly what happened when the Dubai World Vape Expo hit the ground at full speed and never let up. Considering that this was Quartz Business Media’s (QBM) first vape expo and the fact that this was the first truly international show in a year and a half—and considering this show was held in a country where up until a year ago vaping was illegal—well, what you have is a trifecta.

The industry has been hungry—starving—for live events, and in this not-quite post-Covid period, this was a risky move in many ways.

Vaping continues to be under attack in the U.S., with the Food and Drug Administration still looking for ways to make life difficult, and even in Europe and the rest of the world, many people still consider vaping to be as dangerous as smoking, regardless of what the Royal College and Public Health England say.

Science be damned, media loves controversy, and vaping can be a lightning rod.

This was my first visit to Dubai, and aside from Singapore, this is probably the cleanest, most polite and grandiose city I have visited. Considering that Dubai strives for many firsts, this first vape show falls in line.

The Burj Khalifa, at 2,722 ft high, 160 floors, is the tallest building in the world, and holds many international records. The Dubai Mall, sitting at the foot of the Burj, is the largest mall in the world at almost six million square ft and could take days to see all the shops. Around the corner, launching the end of October, is Ain Dubai, the soon to be largest Ferris Wheel in the world, at 820 ft, twice the height of the London Eye.

There was a definite British vibe here, and that makes sense since QBM is based in Surrey, U.K. Many of the exhibitors were U.K. companies, and the U.K. Vaping Industry Association (UKVIA), helmed by John Dunne, brought many of the speakers and guidance to the gathering.

I asked Dunne if there was any connection between the Dubai event and the U.K. vaping industry, and he said there was a definite kinship. 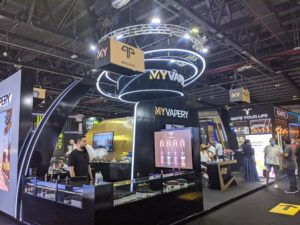 “The British vape companies are very keen on international expansion, and the Middle East is a brand new market. Until recently, vaping was illegal in Dubai, UAE and other countries nearby, but the government is now recognizing the benefits of vaping. There were several Chinese and American companies who were unable to attend, so that changed the composition of the attendees.”

The event was intended to be even larger than what it was, which was about 200 exhibitors, and without travel restrictions it would have been even more diverse. Considering this was the first international show in almost two years, those are impressive numbers.

And the eyes of the regulators were on the show floor. I was told that government people were checking the registration process all the way to the show floor and making sure that masks were used, vaping was done in the appropriate areas and no one was abusing the event.

I asked Dunne if he was overall pleased with this show, and he responded, “Absolutely! I’ve seen vape shows develop over the years, and many of the early ones were embarrassing. They were more party and less business, but as the vaping world has matured, so has the event space. We had many conversations with the regulators and had to share with them that vaping is a harm-reduction product and not a smoking product. Since we have had years of experience in the U.K., and since Public Health England has been generally pro vape, we hope that can fast-track the acceptability over here.”

Dunne appreciates that the U.K. keeps things simple from a regulatory perspective, especially compared to the U.S., and he hopes that the Middle East uses more common sense and less bureaucracy.

There were several American companies there, including Charlie’s Chalk Dust, Coastal Clouds, Innevape and The Finest. I asked Jeff Connell, with Innevape, about this show: “This is much bigger than most [events], and we were able to form some strategic partnerships with Middle East distributors, which brings us a whole new market. We’ve seen more activity both in the number of people here, along with their interest in spending money and committing to doing business.”

Salim Lallas with Bawadi Vape, based in Dubai, was ecstatic over the event. His company has been in business since 2016. “Back then our vape community was very small, very intimate, very social,” he recalls. “Now it is becoming more mainstream and less personal, but much larger, and hopefully, more professional. I think the government knew they really couldn’t control it and also that what we were doing was not really dangerous. So rather than fight a losing battle, they concluded that they should learn how to work with us.”

Of the many dozen shows that I have attended worldwide, this one struck a critical balance between business and fun, and based on conversations with many of the attendees, business was definitely getting done! 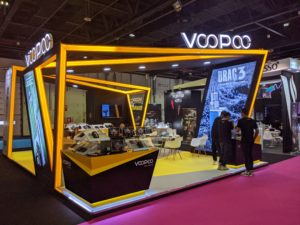 I asked him if the recent Covid travel restrictions hampered speaker’s commitments. “Yes, absolutely,” he said. “The pandemic has affected our timing, and we had to reschedule twice. Everyone had to jump through hoops to get here, and we appreciated all those that came in person. Being a speaker involves work and preparation, and the extra Covid tests made it even more challenging.”

The pandemic brought some positive changes to the world of events and meetings, and remote sessions have been the norm for the past 18 months. For speakers that were unable to attend, Zoom has filled in that gap.

“No question, technology has made this show much easier than if we did not have it,” Caddick confessed. “We have speakers from Australia, South Africa, the U.S. and England joining us live, so once we account for time zones, it’s just a matter of plugging them in.”

The beauty of the online sessions was the fantastic room-length screen, which afforded great video and accommodated panel sessions.

I spoke with Jake Nixon, event sales manager, and asked, “Why Dubai?” and he replied, “Dubai is a gateway for the whole world. They have an amazing airport, lots of free zones, and we think Dubai will play a big part in the future of vaping. Dubai was always our No. 1 location when we started with this process a long time ago, and we are happy that we were able to pull this off.

“The U.K. hasn’t had an event since before Covid, so that is why we planned our next one in London just a few months from now. We cut our teeth here, and we have learned a lot about the vaping world. This was our first time dealing in that space and found it much more fun than many other industries.”

The organizers plan their next event for Dec. 10–11 in London at the ExCeL Center. They hope that, by that time, more people will be able to, and feel comfortable traveling, but they understand that many speakers will be joining them virtually once more.

Norm Bour is the founder of VapeMentors and works with vape businesses worldwide. He can be reached at norm@VapeMentors.com or +1 949 495 6162. 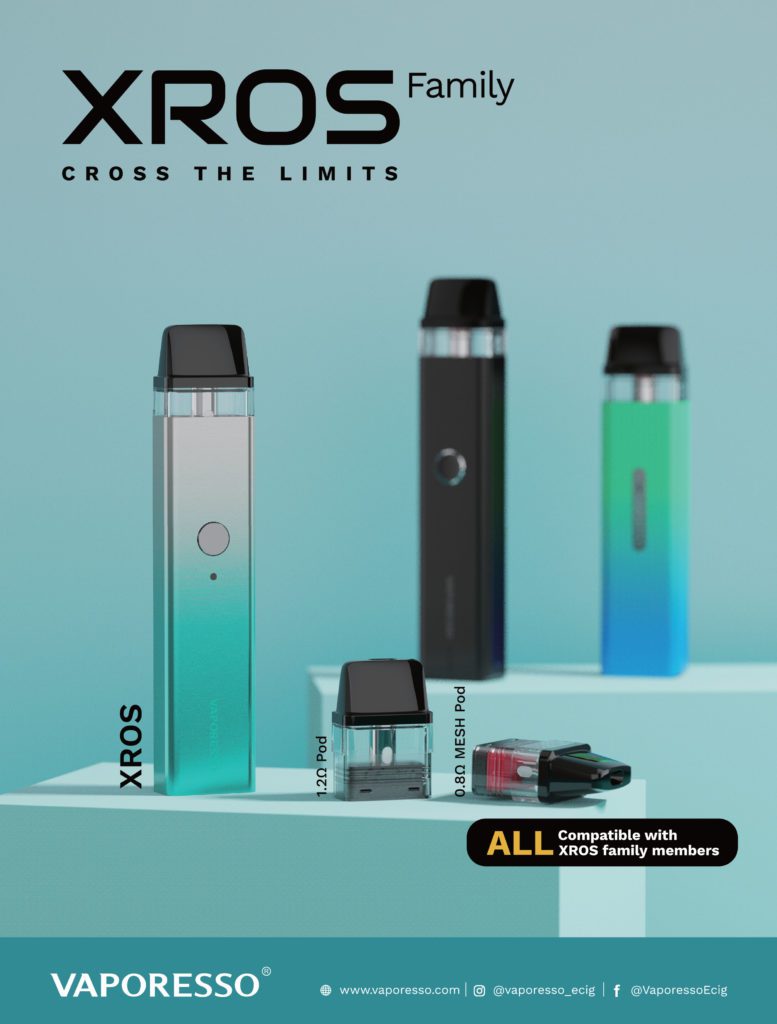