In the wake of marketing denial orders, many U.S. e-liquid manufacturers are turning to synthetic nicotine.

In 2015, Mitch Zeller, the director of the U.S. Food and Drug Administration’s Center for Tobacco Products (CTP), was asked what the FDA’s position was on synthetic nicotine. “I’ll let you figure that one out for yourselves,” he said, hinting that the agency would regulate it as a drug. Today, vaping products, especially disposable devices, using tobacco-free nicotine (TFN) are one of the fastest-growing segments on the market.

After the FDA began issuing marketing denial orders (MDOs) to companies whose premarket tobacco product applications (PMTAs) failed to satisfy the agency’s concern about youth use, many rejected applicants hinted that they would start using synthetic nicotine—nicotine made in a lab and not derived from tobacco—in their flavored e-liquids.

Vapor Salon, for example, announced on Facebook that it would be switching to synthetic nicotine less than 24 hours after the FDA ordered the company to remove its products from the market.

“The main purpose of this is to be outside of the FDA’s regulations with their hefty PMTA requirement, which takes full effect on Sept. 9, 2021, with needing an approved PMTA or your product can no longer be sold,” the company wrote.

In July 2020, Puff Bar announced that it would cease all online sales and distribution in the U.S. until further notice after receiving a warning letter from the FDA. However, the brand resumed sales on its website in February of this year with an altered product. To get around the ban on its products, Puff Bar began using tobacco-free nicotine. As of this writing, Puff Bar continues to hawk its products both on its website and in convenience stores around the U.S.

“Synthetic nicotine products still must abide by nationwide age restrictions, but the Center for Tobacco Products lacks the ability to regulate them as ‘tobacco products,’” said Greg Conley, president of the American Vaping Association. “Unless and until the FDA authorizes a sufficient number of flavored products to keep current ex-smokers off of cigarettes, we will support efforts by small businesses to keep offering their products to adult customers.”

Tony Abboud, executive director of the Vapor Technology Association, said that synthetic nicotine has been available and on the market since as early as 2014, and while the FDA and U.S. Congress could have elected to regulate synthetic nicotine at any time, they have chosen not to confront the issue.

“If it wasn’t for the innovation of the vapor industry, cigarette companies would not today be saying, ‘We want to get rid of combustibles.’ Synthetic nicotine is simply the next level of innovation, and it’s not surprising the government is behind it. The [U.S.] government is always behind companies in any industry that is technological and that innovates,” explains Abboud. “There’s no surprise here. There’s no loophole here. There’s no evasion here. The marketplace is what the marketplace is. It’s up to the government to figure out if and how it wants to catch up.”

Anti-tobacco groups, by contrast, vowed to halt the spread of synthetic nicotine. In a recent letter to the FDA, the Campaign for Tobacco-Free Kids (CTFK), the American Academy of Pediatrics and the American Lung Association, among other organizations, argued that e-cigarette manufacturers are using “a loophole” to avoid government regulations.

Matthew Myers, president of CTFK, said synthetic nicotine is not a safer product, and his organization has sent at least three letters since 2018 to the FDA concerning synthetic nicotine products, none of which has received a response from the regulatory agency. “It is totally designed to circumvent government regulation,” he said. “The companies that have used nicotine derived from tobacco to [now] nicotine made in a laboratory are the companies whose products have been denied because of their appeal to youth and their lack of evidence that they actually help smokers quit.”

Conley said that there is a reason the CTFK’s and other letters have gone unanswered through two different presidential administrations. “Tobacco-free nicotine was invented to eliminate trace levels of impurities that are present in traditional nicotine sources, not to evade regulation. Rather than expanding the futile war on drugs to nicotine, we believe all nicotine products should be regulated as consumer products and sold only to adult consumers 21 years and over.”

Whether the FDA will allow products with synthetic nicotine to stay on the market remains to be seen. Despite its growing popularity, the category current operates in a regulatory void. Because the product is not derived from tobacco, it does not necessarily fall under the 2009 Family Smoking Prevention and Tobacco Control Act or meet the requirements of the Federal Food, Drug and Cosmetic Act’s definition of a tobacco product.

When synthetic nicotine first appeared on the market in 2016, the product was marketed as a way to circumvent the FDA’s proposed deeming rule for next-generation tobacco products by at least one company. The FDA’s definition of “tobacco product” includes any product made or derived from tobacco [that is intended for human consumption], including any component, part or accessory of a tobacco product. E-liquids that do not contain nicotine or other substances made or derived from tobacco may still be components or parts and, therefore, subject to the FDA’s tobacco control authorities, according to the agency.

“However, it’s possible that a disposable, closed system device that contains an e-liquid with truly zero nicotine (or synthetic nicotine) would not be regulated by the FDA as a tobacco product if it is not intended or reasonably be expected to be used in such a fashion,” the FDA states on its website. “[The] FDA intends to make these determinations on a case-by-case basis, based on a totality of the circumstances.”

In late 2016, Next Generation Labs (NGL), the maker of proprietary TFN Nicotine—nontobacco derived synthetic nicotine liquid and crystals—noted court statements made by the FDA in the NicoPure Labs LLC v. U.S. Food & Drug Administration that seemed to confirm that products not made or derived from tobacco fall outside of the FDA’s deeming rule.

TFN claimed that in a response brief to the court dated Nov. 1, 2016, the FDA had stated that not all nicotine-free e-liquids (NFLs) were subject to the deeming rule. “Assuming an NFL is not made or derived from tobacco, it is subject to the rule only if it meets the definition of a ‘component or part’—that is, if it is ‘intended or reasonably expected’ either … (1) to alter or affect [a] tobacco product’s performance, composition, constituents or characteristics; or (2) to be used with or for the human consumption of a tobacco product; and is not an accessory,” the FDA was quoted as having said.

Congress could eventually pass a nationwide ban on synthetic nicotine. A more likely scenario, however, according to industry insiders, is that individual states ban the sale of synthetic nicotine products. On May 17 of this year, the governor of Alabama signed into law Act No. 2021–453, which was backed by Altria, with that purpose in mind.

The legislation, which went into effect Sept. 1, states that “no e-liquid, e-liquid in combination with an electronic nicotine-delivery system, or alternative nicotine product that, in the case of any such product, contains synthetic nicotine or nicotine derived from a source other than tobacco may be sold or otherwise distributed” in Alabama if products have not been approved by the “FDA for sale as a drug, device or combination product.”

Abboud says vapor companies may not want to face the drug regulatory pathway. “Drug protocols are absurd, and if companies cannot even survive this PMTA process, then how would they ever possibly survive the other one?” he questioned. “Are you going to blame a company that spent millions of dollars trying to comply with [the] FDA’s opaque regulatory process, find that the FDA changed the rules at the last moment after the fact, and then and you’re going to criticize that company for doing something that’s currently lawful?”

For the time being, synthetic nicotine e-liquids will likely keep flavored e-liquids on the market despite the FDA’s efforts to remove them. However, Conley warned manufacturers against publicly advertising or celebrating their decision to switch to synthetic nicotine.

“A note to manufacturers planning to use TFN—don’t make public pronouncements about what you’re planning to do over the next month. Just do it,” he tweeted. “[The] FDA may have no respect for you, but there’s no need to blast them publicly. Plenty of harm reduction advocates can handle that.”

What is synthetic nicotine?

A major argument for synthetic nicotine is that it is safer than tobacco-sourced nicotine. The synthetic nicotine has no tobacco-specific nitrosamines (TSNAs), the harmful, cancer-causing chemicals found in combustible tobacco products. TSNAs are formed when tobacco leaves are grown, cured, aged and processed.

Research has shown that all nicotine is highly addictive, and regardless of the form, should be consumed with caution. However, the chemical does not directly cause cancer, which instead results from inhaling the byproducts of combustion.

Whether manufactured naturally or artificially, the nicotine molecule has the same chemical structure, C10H14N2, meaning that it comprises 10 carbon atoms, 14 hydrogen atoms and two nitrogen atoms. What makes it special, independent of its origin, is that it is a “chiral” molecule: It has two stereoisomers that are mirror images of each other.

The most prevalent form is (S)-nicotine, the physiologically active variant. Its mirror isomer, (R) nicotine, also occurs in plant-derived nicotine in small amounts but is considered physiologically ineffective. Synthetic nicotine is made with a combination of niacin, ethanol, sulfuric acid and a few other chemicals.

Traditionally, a problem for the producers of synthetic nicotine has been that the production process is both complicated and expensive. As a chiral molecule, nicotine is far easier to produce as a synthetic nicotine with equal amounts of both (R) isomers and (S) isomers compared to a nearly pure (S)-nicotine.

Today, that’s no longer the case. Synthetic nicotine can be purchased for nearly the same price as tobacco-derived nicotine and in some instances for even less. This is due to advancements in the commercially scaled bulk production of synthetic nicotine for use in the tobacco, vaping, pharmaceutical and scientific research industries.

In November 2020, eLiquiTech, a wholly owned subsidiary of Tobacco Technology Inc. (TTI), released its recently patented SyNic synthetic (S)-nicotine. Because SyNic has greater than 99.7 percent (S), an e-liquid needs only half the amount of SyNic to create the same effect for users as current 50/50 synthetic nicotine offerings on the market. 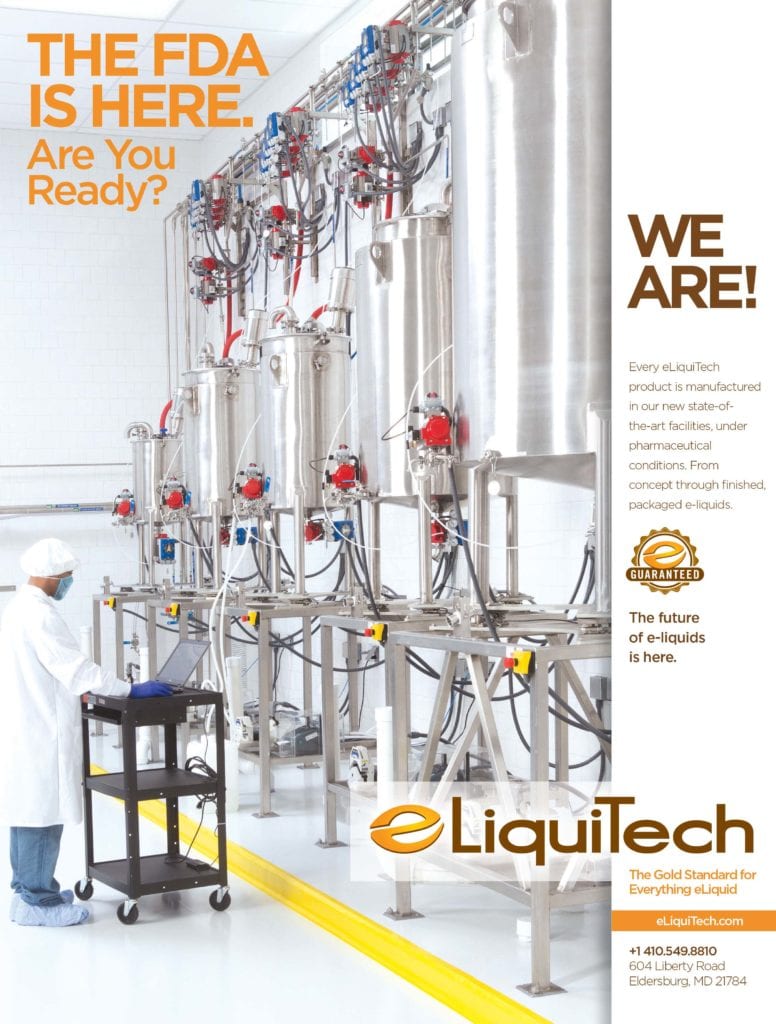