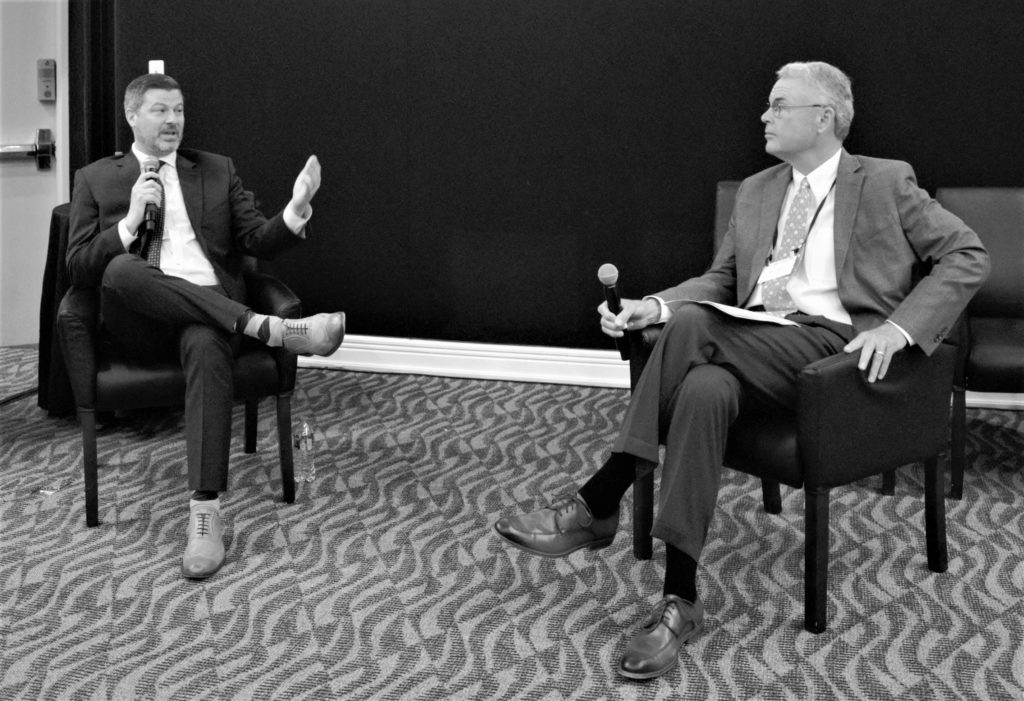 The U.S. Food and Drug Administration has been busy. Before it had the chance to finish the first round of premarket tobacco product application (PMTA) reviews, the agency’s Center for Tobacco Products (CTP) was charged with also regulating all synthetic and other nontobacco-derived nicotine products (see “Unnatural Response,” page 28). Manufacturers must submit PMTAs for the newly regulated products by May 14, 2022.

During the 103rd annual meeting of Vapor Voice’s parent company, TMA, Mike Ligon, TMA board chair, and Matt Holman, director of the FDA CTP’s Office of Science (OS), discussed the regulatory agency’s challenges and lessons learned in regulating electronic nicotine-delivery systems (ENDS) and other novel tobacco products. It was the first time Holman had spoken publicly since Congress granted the FDA the authority to regulate synthetic products, and Ligon emphasized that the audience was eager to hear Holman answer questions.

Holman made clear from the beginning that he heard during the conference that the FDA needs to do a better job with consistency, transparency and predictability. “That’s something I’ve strived to make sure we do as office director, but I’m hearing we’re not doing as good a job as we need to,” said Holman. “That’s something I’m certainly taking back to my colleagues to figure out … I think the point I’ve heard the most along those lines was just the timing and not knowing what the timing would be [for] taking action on applications. We need to do a better job of that.”

After a federal judge ordered the FDA to complete a majority of PMTA reviews by Sept. 9, 2021—one year after the deadline for PMTA submissions—Holman said the review process was still new and that it was a challenge to build the programs necessary to complete reviews on time. He said that staffing the agency, for example, was a giant undertaking.

“Something folks outside the agency don’t think about all that much is staffing levels. When I took over this position, we had something around 325 staff members that were in the office,” Holman explained. “And now, five years later, we have about 575-ish. Any of you who have not been in the federal government and tried to hire—it is a huge-level effort to hire that many people in that period of time; a huge-level effort … half my staff have come on board during the pandemic and have not met colleagues in person.”

Holman said that the big-picture goal for the OS and FDA alike is creating an offramp for smokers to transition to less-harmful products while minimizing any potential on-ramps for youth initiation, adding that youth use has been “decreasing the last couple of years, which is a really positive thing.” He also explained that the agency often hears a lot of criticism, some undeserved, surrounding the misinformation disseminated into the public by “stakeholders” (anti-nicotine organizations, health agencies, tobacco control groups, regulators and industry players).

“We take all the feedback seriously … And we certainly actively encourage all stakeholders to engage with one another. I would hope to be able to sit here and say that I’ve been more successful than I have in that. There’s still a lot of resistance. There’s still a lot of really emotional, heated exchanges and feelings toward stakeholders,” said Holman. “I’m even seeing a shift in some of the stakeholder groups that have been aligned [previously] and now aren’t necessarily aligning.

“I’ve just celebrated 20 years at the FDA in December. That entire 20 years, I’ve spent really actively engaging with all stakeholders, and I think it’s critical as regulators that we hear from and we talk with and we communicate—and we’re trying to be as transparent as possible—with all stakeholders. Unfortunately, I don’t control all the stakeholders. And I keep carrying this message forward. It doesn’t always get heard so well. And so, it’s still very much a work in progress.”

Ultimately, Holman said the FDA is trying its best to base its decisions on the “good” science and not a specific source of data. “I don’t even care who the author is. I mean, the science is science,” he said. “Unfortunately, we have a lot of stakeholders that don’t look [at] it that way, and a lot that think they know what the policies shouldn’t be, and they want to come up with the science to demonstrate that. But we’re very aware of that. We’re very much looking out for that type of thing.”

Holman said he understands the frustration of trying to combat misinformation. On the FDA’s side, he wanted to clarify at least some of the misunderstandings and misperceptions he commonly hears when stakeholders discuss the FDA. For example, he had recently heard a stakeholder saying that the FDA only had one economist on staff. “FDA has more than one economist,” he said. “The CTP has more than one economist. I want to be clear about that … You can agree or disagree with where economists land on their analysis. That’s fine. But just to say that we only have one economist—this concern is just a major misrepresentation of the situation.”

There are also the rumors that the regulatory agency doesn’t read all the docket submissions (everything submitted to the agency, whether a comment on rulemaking or a PMTA). Holman said the quality of the submissions vary greatly, but the agency is required by law to look at every single one. “To suggest that the FDA’s regulators don’t carefully consider the data when we’re weighing options … at the end of the day, we have a public health mission where we’re here to serve,” said Holman. “We’re not here to oppose anyone. I look at data from all sources. I don’t care who it comes from … to suggest anything otherwise, at least for the FDA, honestly, it’s a bit insulting … you can criticize all you want about where we come out on decisions and rulemaking, but at the end of the day, we are very much a science-based organization.”

The agency also tries to consider the unintended consequences of regulatory action, according to Holman.

However, he explained that determining these factors, such as the growth of a black market, is complicated because there’s often not a lot of data.

“It’s very much [speculating] what’s going to happen to the black market or the gray market when we take an action. We don’t often have data on that. So it’s really modeling or predicting,” he said. “We absolutely consider that because, at the end of the day … as I like to say to my staff, we’re trying to tackle this with a scalpel not a machete. Because I think that’s how you sort of leave this fine line that we’re all trying to leave here.”

Ligon asked Holman whether the FDA’s approach to regulating next-generation tobacco products was a workable standard. Ligon wanted to know if the FDA still recognizes that tobacco products exist on a continuum of risk, with combustible cigarettes being the most harmful (the “continuum of risk” is the scientific concept that not all tobacco and nicotine-delivering products are equally harmful). Holman said that while the FDA doesn’t know precisely what the relative risks are of the different products on the spectrum, the agency still believes in the continuum of risk.

“The challenge is having strong, rigorous data that we can stand behind and say, ‘Yes, we know this product is lower in risk than that product.’ That’s one of the biggest challenges still, I think, figuring out how to collect that data, what are the right types of studies, what’s the sort of full body of data that we need to be comfortable saying, ‘Yes, this product is down the continuum from that product,’” he said. “I think the other big challenge in this is … communicating with the consumers because if they don’t understand—and we know there’s a lack of understanding—a lot of misperceptions and misunderstandings [begin to grow].”

Communication is key. Holman said that to better understand the process and the challenges that stakeholders are suffering, the agency needs to better communicate its thought processes and goals. Before the Covid-19 pandemic limited stakeholder interaction, the agency would hold workshops to hear directly from stakeholders about their concerns. Holman wants to bring back that level of communication.

“We need to do workshops. It’s been almost a year since we’ve done the last workshop, and a whole heck of a lot of things have happened in that time period. We’re definitely going to take that back with our staff and talk about how to put some workshops together because the feedback we’ve gotten to date on the workshops we have done [previously] have been very positive,” said Holman. “Folks really appreciate the discussion. Not only to hear what we have to say, but just talks among attendees and some shared ideas and thoughts.”

When asked if there were any suggestions from TMA attendees for workshop concepts, several stakeholders offered ideas. One stakeholder wanted to discuss with the FDA how PMTA data is managed and submitted to the FDA. The participant said that his company had received a deficiency letter; however, the additional data requested was already included in the company’s PMTA. Holman said that type of seminar would be a “win-win” for both the agency and the stakeholders.

Another attendee suggested that the agency bring in consumers to allow the FDA to hear from them directly and to understand the consumers’ thoughts, behaviors and attitudes as well as the impact of potential regulations on possible future consumer behavior. “I just feel like there’s a gap,” the attendee said. “I really think that would do a lot in being able to bring all of us together to promote the science.”

Other attendees wanted to have a better understanding of how the FDA comes to its decisions and what some of the common errors were in PMTAs that had received marketing denial letters. “I’m suggesting a little bit [of a] deeper dive by product category into the top 10 reasons you’re finding that something succeeds and [the] top 10 reasons you’re finding that something fails,” the attendee said. “I’m talking more about … here are the reasons why these fail … here’s why this doesn’t work.”

Holman said the fundamental goal of the FDA is moving people down the continuum of risk. He said that the consumer is the most important part of the equation and that all stakeholders need to be better at getting less-harmful tobacco products into the hands of adult combustible smokers. He said that he would hope that five years from now the tobacco product marketplace looks very different. Holman suggested that manufacturers with the ENDS products that exist now, alongside the “products we’re not even talking about that I know are in the pipeline” at various companies, should also consider using the agency’s modified-risk tobacco product (MRTP) pipeline moving forward.

“I would hope that our MRTP program sees a lot more action and that we see a lot more modified-risk statements on products … And again, I think the lack of dialogue amongst stakeholders, and the lack of sort of any level of agreement, really thwarts communication because the information the consumers are receiving, it’s all over the place, right?” Holman suggested. “There’s a lot of misinformation out there that certain stakeholders convey that just doesn’t reflect the science. Just flat out doesn’t … if we could just get stakeholders to agree on some basic key communication points that we would all collectively share with consumers, I think we could really drive this forward. But right now, consumers are just confused.” 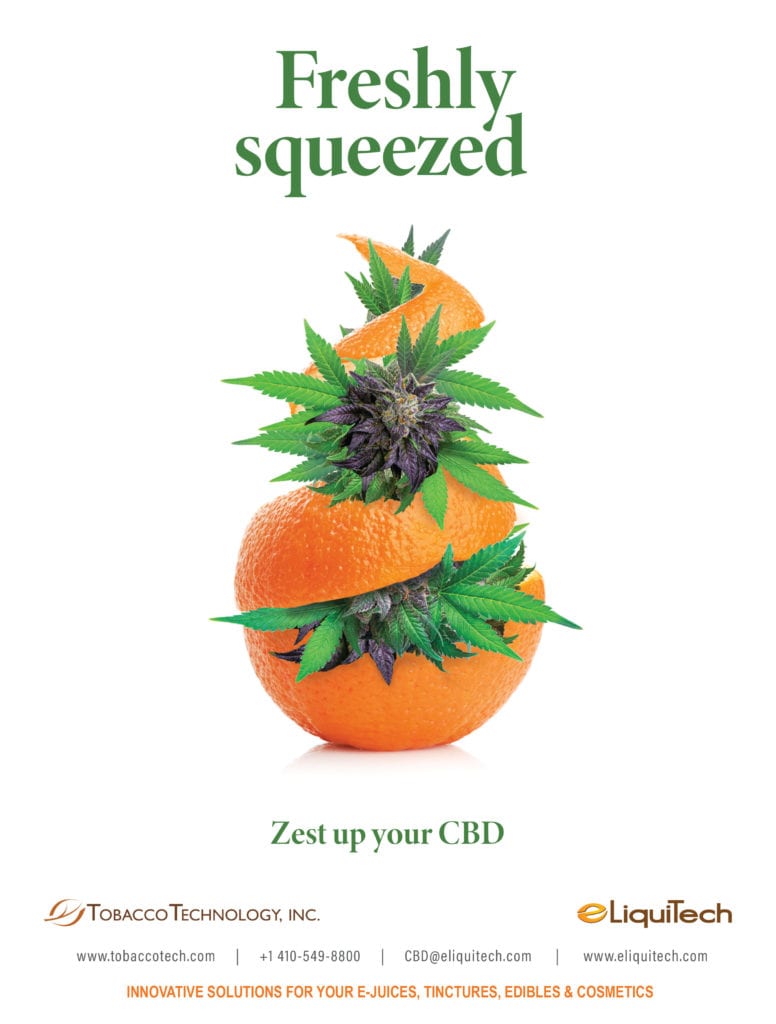