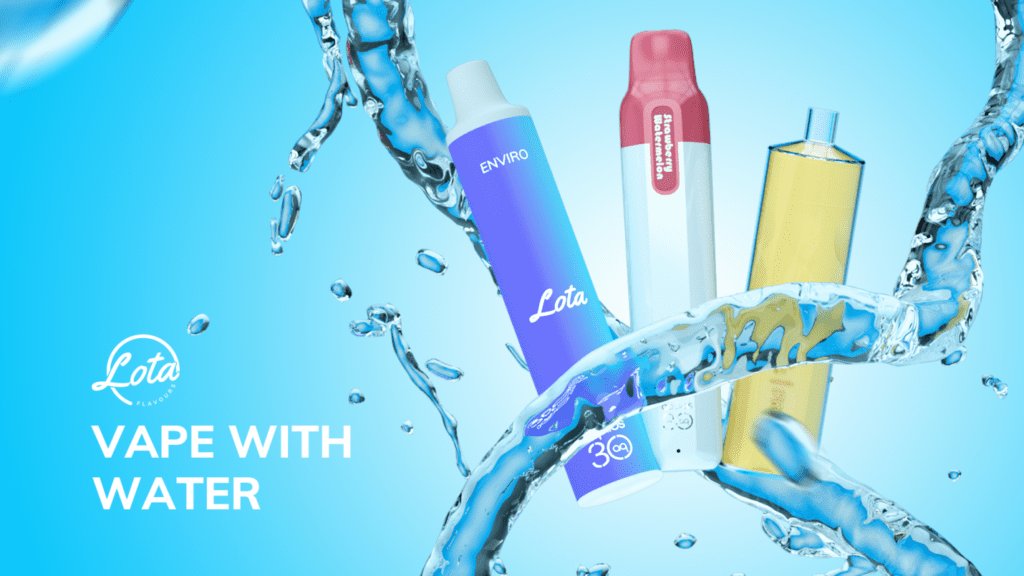 Aquios Labs introduces the industry’s first e-liquids with a water concentration of more than 3 percent.

Jack Sanders has been in the vapor industry for only six years. He has been in China for the last nine years, and for the last year, he’s been researching a revolutionary idea. When the pandemic forced him to stay in Shenzhen, the capital of e-cigarette production that accounts for about 90 percent of the global vaping market’s manufacturing output, it turned out to be a life-changing happenstance. The situation gave Sanders the motivation he needed to potentially disrupt an already disruptive industry.

The vaping industry has always embraced innovation. From its beginning, it set out to take customers away from the combustible cigarette sector by offering less risky alternatives for consuming nicotine. Except for maybe synthetic nicotine and nicotine salts, the major innovations in e-cigarettes have been in hardware. Now, Sanders and his new company are introducing a new e-liquid system that its founder says is going to transform the industry.

It all started with a conversation, almost a joke, among close friends that set Sanders on a journey to take water-based vaping seriously. “We can do this,” he said at the time. Aquios Labs in April launched its new AQ30 disposable vaping system in the United Kingdom. The water-based e-liquids could be troubling for the competition. Sanders, co-founder and CEO of Aquios Labs, says the first generation of this new technology, which requires a specialized atomizer, can support e-liquids with up to a 30 percent water concentration. Water allows for the usage of less PG and/or VG as a base for the nicotine and flavoring.

“We noticed that there was really nothing new in terms of e-liquids and technology breakthroughs. There’s not been much in terms of e-liquid innovation since nicotine salts came out, so we thought we’d give this idea we had a go,” explains Sanders. “The technology just basically evolved through numerous tests and numerous hours spent in R&D. We managed to make a [coil] technology that matched the liquid with a higher water content. It was never just the e-liquid itself that we were developing.”

Sanders and his team began to delve deeper into research on water-based liquids, and they found that no one had gotten above 3 percent. As the team got closer to its objectives, through researching and testing, they began to discover that water-based e-liquids brought ancillary benefits as well. Nicotine, for example, can be delivered into the body faster with the addition of water into the liquid. The system  can also be used with nicotine salts and synthetic nicotine.

“You can reduce the temperature of the boiling point. So, PG and VG, their boiling point is about 188 degrees Celsius [370 degrees Fahrenheit] and 290 degrees Celsius [540 degrees Fahrenheit], respectively,” explains Sanders. “So obviously, being able to bring the temperatures down makes the liquid’s chemical stability better. Lower temps also enhance flavor profiles in the e-liquids.”

Aquios Labs is positioning itself as a technology company rather than a consumer-facing brand, hoping to integrate water-based vaping into existing product portfolios. The first generation of its technology, dubbed AQ30, can support up to 30 percent water content using a combination of specially formulated e-liquid and hardware design. The first commercially available water-based vaping devices came to market in mid-May. Aquios says it is already developing the capability to support even higher levels of water content.

“We’re aiming to get the majority of the liquid to be water. It’s in the R&D process. I can’t put out a date on when that would be released, but it’s definitely in the process, and we are more than capable of reaching these points,” explains Sanders. “Currently, the [Aquios] technology is only available in disposable devices because it’s the most stable. But we are working on refillable tanks and to be able to sell separate juices and separate coils for refillable or open systems.”

Sanders says it’s all very intricate research. One change in the water content and the coil technology needs to change as well. “The technology and the core elements of the devices that we’re producing, they have to be matched. It must be the AQ30 liquids matched with the AQ30 coil. Any kind of deviation, like any less water, we need to change the tech. Any more water, we need to change the tech,” says Sanders.

The tricky part of the equation in water-based vaping has always been getting enough vapor production because the addition of water reduces vapor production significantly. It is also challenging to ensure the liquid has the proper flavor and doesn’t leak or create dry hits. Everything has to be just right. Sanders says that it entailed a lot of R&D, but with the help of Innokin’s engineers, the problem was solved. However, he can’t give that secret away yet. How the nicotine remains soluble in water is proprietary.

Sanders says that several devices have been stored for months, and there has been no detectable drop in performance. He just can’t discuss the technology behind the Aquios system because the products are just starting to enter the global market, and no secret is safe in the competitive vaping industry.

“I just can’t talk about it,” Sanders says. “How the technology must change for varying amounts of water … the technology changes. How that works exactly, I just can’t say. This is as far as I can delve into this right now. I don’t expect it will be long, however, before someone tries to figure out exactly what we are doing. And if they do that, then fantastic. It means that I know that there’s a lot of interest in the product. But we’re working on the next stage of development already, so it would just become a game of catch-up for other companies. We also have the best manufacturing partner that is highly skilled.”

What sets Aquios Labs apart from other device manufacturers, beyond its high amount of water usage in its liquids, is the dedication and expertise of the company’s manufacturing partner, China-based hardware manufacturer Innokin, says Sanders. Innokin has been in the vaping industry for more than a decade and has a market presence in more than 80 countries. Innokin’s long history includes pioneering variable wattage capability and, more recently, the success of its Zenith tank, which has won numerous awards for being one of the best mouth-to-lung tanks on the market due to its exceptional flavor delivery.

“We utilized Innokin’s innovation expertise on our hardware. Without the partnership, we would not be able to release a water-based disposable right now,” Sanders says. “Hardware innovation is not as simple as it looks. We needed to balance power, airflow, wicking, the heating element, internal structure, etc. If someone opens it and sees what we are doing, that’s not enough for reverse-engineering. Just think about Zenith tanks; any factory can get the samples, but no one had made something on the same level yet.”

Several brands are already using the Aquios system. In the U.S., it’s used in Esco Bars. Additionally, Innokin says that it was “already placing a significant bet” on the future of water-based vaping. The company went beyond just manufacturing the hardware and also partnered with Aquios in launching Innokin’s own lineup of vaporizers using the Aquios system in April under the Lota brand.

“Innokin has always believed that new technology has the power to eliminate the need for combustible tobacco. When we were introduced to Aquios, our product development team was immediately sold on the unique advantages of water-based vaping,” George Xia, a co-founder of Innokin, said. “Water-based technology and e-liquids result in a vaping experience that no other device can replicate, with no leakage, enhanced flavor clarity and faster nicotine satisfaction.”

Lota’s initial launch included a portfolio of three water-based devices, each with their own position for specific global markets and consumer needs. The Lota Enviro is a disposable device with a clear mission to reduce the carbon footprint of typical disposable vapes. Enviro achieves this with a unique paper shell design using recyclable materials and user-recyclable components. After the Enviro has been fully depleted, the device can be disassembled by the end user, and every component aside from the e-liquid reservoir can be fully recycled. The Enviro launched with 10 flavors and provides a 600-puff lifespan with 2 mL e-liquid capacity for TPD-regulated markets.

The Lota F600 is the brand’s flagship disposable vaporizer, which is also targeted toward TPD markets. The F600 features a 600-puff lifespan and delivers a constant 3.6 V output, which means consistent performance from the first puff to the last, according to Innokin.

The third product in the launch is the Lota Prefilled Pod. The Lota Prefilled Pod Kit integrates revolutionary Aquios water-based vaping technology into a closed pod system with a rechargeable battery. Each 2 mL pod is designed to last for 600 puffs, and the battery provides constant 3.6 V output for a consistent vaping experience throughout each charge cycle.

The Aquios devices are also more environmentally friendly than most current vaping products. Sanders says that the disposable products that use the Aquios system can be easily broken down by the consumer and recycled through traditional means. “The outer shell, which makes up most of the device, is made from reinforced cardboard. This can be recycled in any standard recycling bin,” he says. “The lithium-ion battery has been designed to easily detach from the atomizer and can be recycled at any battery disposal point.”

Aquios products have been well received by consumers. Sanders says reviews online have shown that people were skeptical at first because the technology is new. However, after vaping Aquios and comparing it to their old device, consumers realize there is a big difference between the two systems.

“The Aquios vape is a lot smoother. Lowering the PG and VG allows for a lot of advantages, especially in reducing irritation. I know that I’m personally a little bit allergic to PG, so any high-PG ratio liquids for me are not good. It just doesn’t agree with me,” he explains. “Also, with the reduction of the VG, liquids aren’t oversweetened by the VG. The flavoring is amplified. By reducing the amount of VG, you get a much cleaner, natural taste as well.”

Moving forward, Sanders says he hopes Aquios can collaborate with multiple different companies in producing a range of coils for multiple different tanks. Those coils would be paired with Aquios liquids with varying water amounts, such as 30 percent, 40 percent or even as high as 50 percent water. Currently, the company is based in the U.K. and is developing its European market. It’s a natural place to start because it’s the largest market that has fully embraced vaping as a harm reduction tool. Aquios has its sights set on the global market, however.

“Moving into additional markets is something that I do think is in the pipeline right now,” says Sanders. “We’re focusing on getting through the intial launch, but there are numerous markets we are looking at in terms of growth and opportunity. The general feeling of this liquid and the tech behind it is that together the system produces a much smoother and more pleasurable vape. I think it’s a product that can be successful in every market.”

“That’s the end result,” he says. “You don’t have as much of the dry mouth. You don’t have as much irritation in your throat from continuous vaping or higher nicotine levels. It’s going to be something cool. And I think it’s going to be something that—once it has a larger market presence and more people have the opportunity to test it out—consumers are going to realize that it’s something worth having. This is the product they will want to vape. It’s a game changer.” 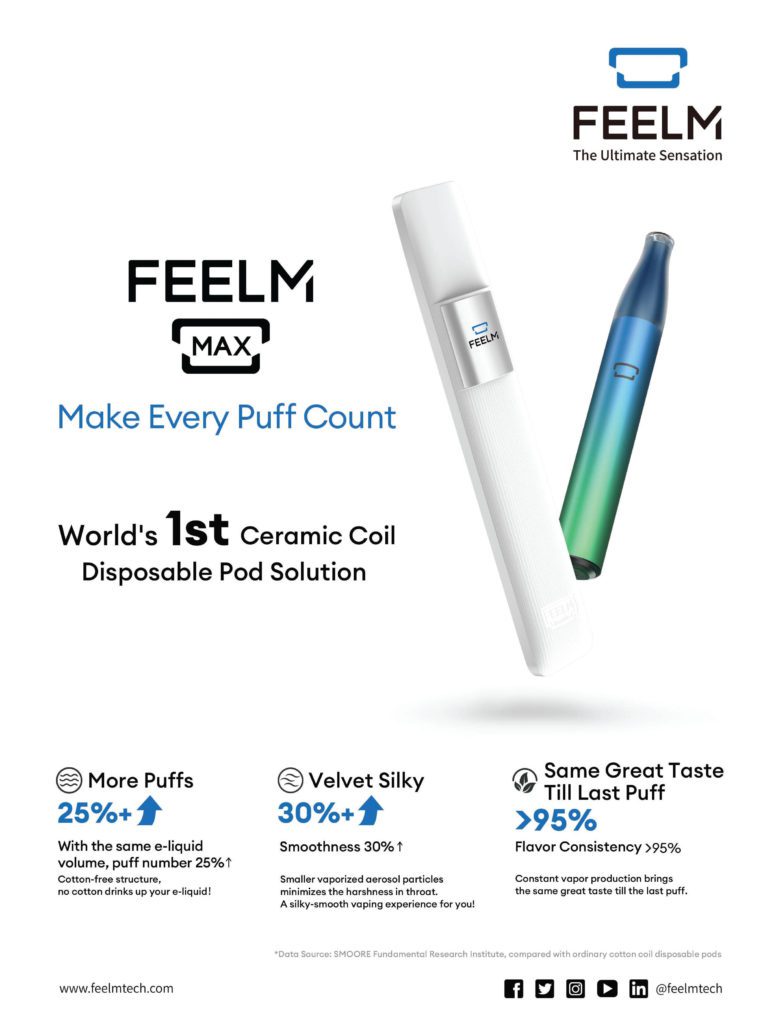