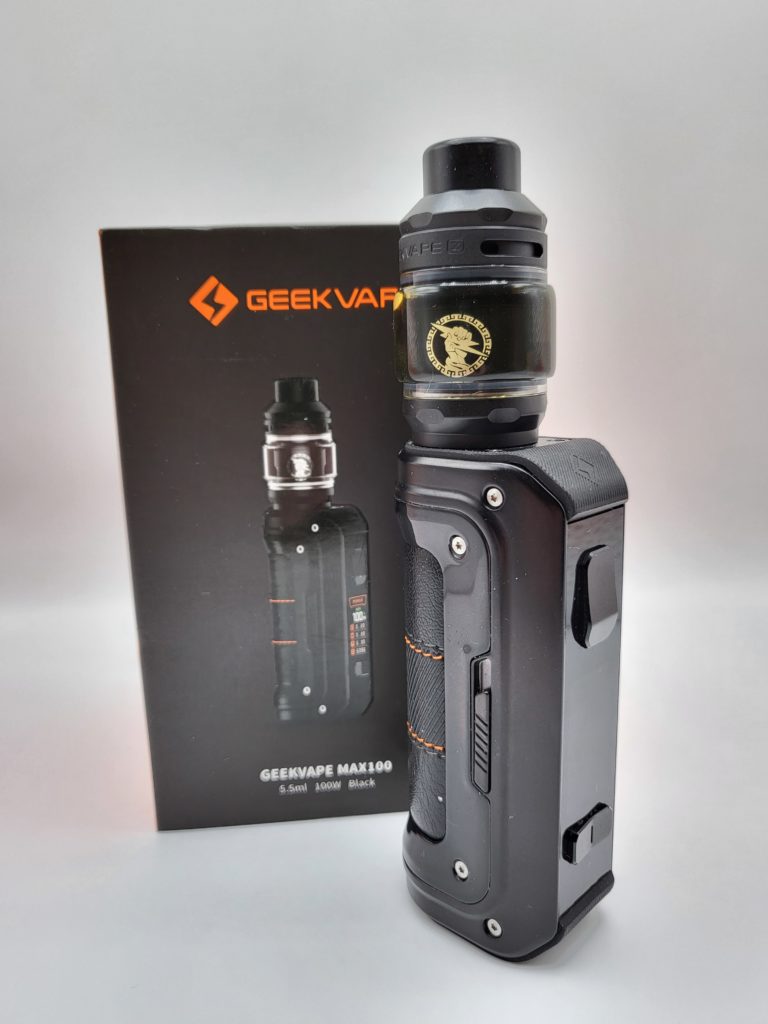 GeekVape’s new Aegis Max 2 retains all that made prior mods desirable and improves upon the nitpicks.

GeekVape is at it again with even more refinement and improvements to this latest version of the ever-popular Aegis series of mods. The Aegis Max 2 (also referred to as the GeekVape Max 100) is the king of intermediate mods, with a plethora of features for more advanced users and enough simplicity for the intermediate crowd. GeekVape took the already fantastic Aegis Max and somehow made it even better.

The Aegis Max 2 is a single-battery mod that can fire atomizers from 0.1 ohm to 3 ohms up to 100 watts. By default, it requires a 21700 or 20700 battery, but an included adapter makes it possible to use an 18650 as well. Batteries can be swapped and charged via the screw-on battery door at the bottom of the device or charged internally through the use of a USB-C port.

The traditional three-button setup is used here, with an additional slider on the side of the device to toggle the firing lock. The screen has been upgraded to color and displays the usual information at a glance: remaining battery life, resistance of the attached atomizer, power/temperature setting, amperage and voltage output, and a puff counter.

The Aegis Max 2 is available in a variety of colors and comes as a standalone mod or in a kit with the latest GeekVape Z (Zeus) sub-ohm tank. The kit also includes a USB charging cable, replacement glass, too many O-rings to count, the 18650 battery adapter, a tool to help with coil removal, and a 0.2 ohm dual-coil replacement coil. The GeekVape Z also comes with a 0.2 ohm mesh coil preinstalled.

What has always set GeekVape mods apart is the aesthetic and build quality. This masterpiece of leather, silicone and metal looks and feels rugged with a more streamlined, squared-off look compared to its predecessor. It’s also water resistant, impact resistant and dust resistant.

The overall size has also been toned down slightly, which actually provides a more secure fit for the battery. The connection supports a flush fit for atomizers with diameters up to 25 mm, down from the oversized 30 mm connector featured in the previous generation. The matching tank tapers down to 24 mm at its base and looks fantastic atop the Max 2.

It also has the often-neglected bypass mode for users who want to use the natural battery voltage, similar to unregulated mods. Each of the aforementioned settings can be tweaked and customized using the in-mod menu and the three buttons. Many of these settings are for niche users with specific tastes, but the option is there for anyone to experiment with.

For most users, they simply want to fill a tank, choose their wattage and vape. That’s definitely possible on the Max 2. For all the intricate settings available, they can all be ignored or utilized at the users’ leisure, conveniently hidden from anyone who simply doesn’t care. It’s the best of both worlds as the potentially confusing nature of menus and button combinations needn’t hinder the experience of those looking for something simple.

There are three distinct ways to lock the device, thankfully none of them are redundant. As per usual, five clicks of the fire button will turn the device off (or on), preventing settings from being changed and the device from firing. By holding the plus and minus buttons simultaneously, the power setting becomes locked, allowing the device to fire but preventing accidental changes to the power or temperature settings.

Lastly, the slider on the side will prevent the device from firing and the settings from being changed without powering down. It’s a most welcome addition, completely negating the frustrating experience of trying to click the fire button five times only to not have the command actually register. What’s more, the Max 2 powers itself back on once the battery has been replaced, so the generally horrible five-click on-off feature never needs to be used again if the user so wishes.

The battery door has also been markedly improved over the original Aegis Max. Over time, that battery door could easily become cross-threaded. Due to the battery having more wiggle room, it could become difficult to determine when the battery door was adequately screwed in. With the Max 2, however, the battery door catches much more easily and has a distinct stopping point to prevent overtightening. Additionally, the battery door is recessed only by about half a millimeter to the point that it looks like a flush fit but doesn’t ever protrude past the base of the mod. The tighter tolerances have undoubtedly led to a more consistent and less fiddly experience.

The charging port has also been redesigned. The Aegis Max 1 had a small silicone plug on the side of the device that could be difficult to remove, and once it was removed, it revealed a micro-USB port. Now with the Max 2, a USB-C charging port has replaced the obsolete micro-USB connector, and it’s been relocated to the top of the mod. A large silicone flap sits right above the fire button and is effortless to remove with the thumb that’s also used to fire the mod.

Speaking of the fire button, it still retains a rocker shape but has been elongated to better fit the thumb and made to be more clicky and less mushy. The plus and minus buttons are also two parts of the same single button and sit side by side instead of over-under. Overall, the above changes not only improve the aesthetic of the Aegis Max 2 but also the functionality, ease of use and “feel.”

The included tank, the GeekVape Z, is more or less the same as it’s ever been—fantastic. It’s top filling and top-down in terms of airflow and provides copious amounts of vapor and flavor for a wide range of power settings. Even upon the initial fill, it primes quickly, with zero break-in time. It holds a respectable 5.5 mL of e-liquid and is relatively compact given the amount of e-liquid that it holds.

What’s especially nice is that the bubble glass doesn’t protrude very far, and the tank section is relatively lengthy. That means it has a higher chance of surviving if it tips over and doesn’t look ridiculous while still providing a substantial capacity. Being that the tank uses top-down airflow, it will never leak out the bottom and make a mess in the event of flooding.

At worst, it will produce some spitback and need to be turned upside down and cleared to return it to full working order. It also means that the mod and hands are spared from condensation and spittle that tend to accumulate around the atomizer with tanks that opt for bottom-up airflow. Additionally, the airflow ring turns smoothly with hard stops on either end while providing a wide range of airflow options from restricted to wide open. Mouth-to-lung vaping is out of the question for all intents and purposes, but that’s why the mod is also available solo without the tank.

All in all, the GeekVape Aegis Max 2 retains all the things that made prior mods desirable and improves upon all the small nitpicks. The improved charging port and its location, the tightened-up battery cap, the new slider lock, the much more reasonable 25 mm 510 connector base, the refined buttons—all these things come together to make the Aegis Max 2 a full-blown upgrade to the Aegis Max 1.

Not to mention the general size and shape that favors lean, efficient functionality and appearance in lieu of girth and bulk. The Aegis Max 2 makes much better use of the space available, offering a 21700 mod that could pass for an 18650 device. The downside of that extra boost in power and battery life has always been size, but that downside is virtually nonexistent with the Aegis Max 2.

The Aegis Max 2 can be purchased for $50 to $70 at retail, making it one of the best bangs for the buck out there. While at least one battery is required to be purchased separately, increasing the total investment, an external charger isn’t necessary.

For anyone looking to upgrade to a proper mod or anyone looking for something that just looks and feels great with all the advanced features in a compact package that can be taken out for the day with minimal hassle, the Geekvape Aegis Max 2 is best-in-class. GeekVape retains its track record of offering top-quality products that look and perform like no other while keeping things affordable. 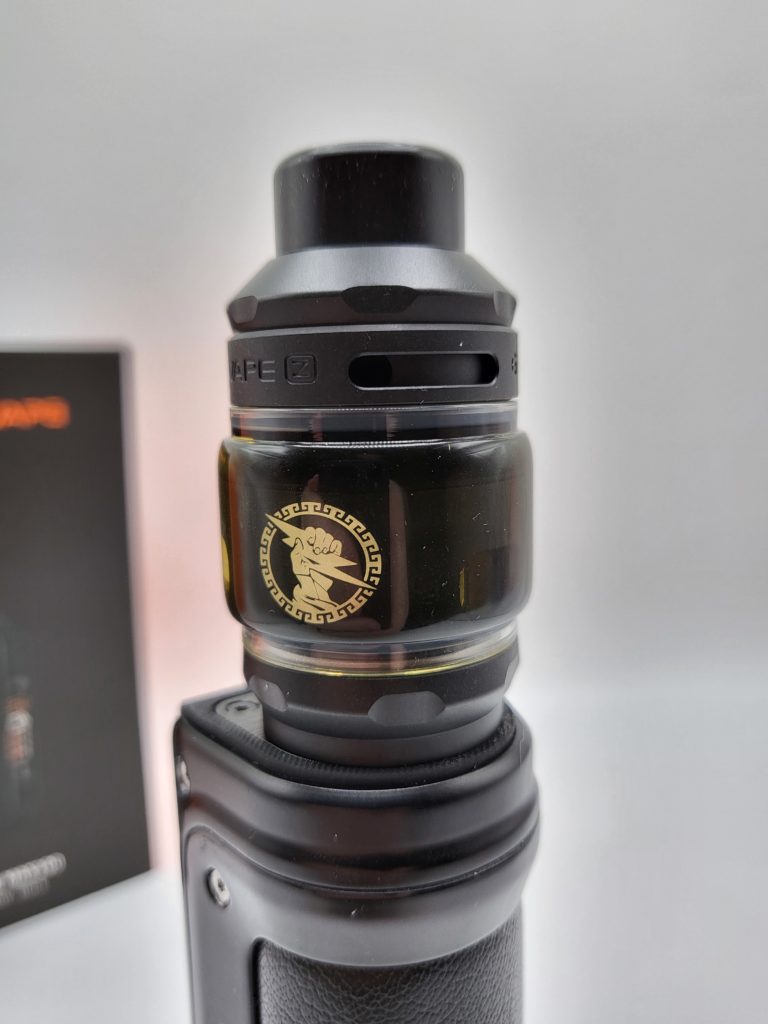